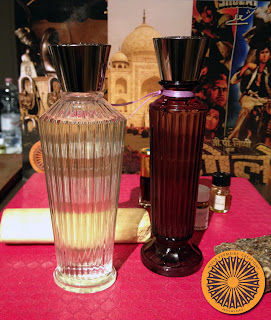 Going on walking along the Walk of Fame of the most interesting fragrances smelled at Esxence 2013, the next step takes me on the star of Neela Vermeire Creations. As usually radiant and passionate, Neela welcomes people at her booth with her smile and suddenly it feels like home. The first upcoming news is Mohur eau de parfum Concentrée, that's almost an extrait de parfum as Neela confesses. The composition is the same but the higher concentration makes the Mohur Emperess and her Emperor, rose and oud, beat here like two resonating hearts giving it incredible lasting power and sillage on skin. The second upcoming news is a new creation Neela and Bertrand Duchaufour have been working on during the past year: Ashoka. The name comes from Ashoka the Great who lived in 300 B.C. He was a bloody tyrant but after converting to buddhism, he spent the rest of his life building monuments, monasteries and doing charitable works. The fragrance is as regal as him and crowns Mysore sandalwood in all its splendour. Like Ashoka's life, this eau de parfum spreads a wide range of sensations, from the green opening with mimosa and fig leafs through the floral heart with lotus flower and osmanthus to the resinous, toasted base. All is wrapped in this wonderful wood's milky mellowness that's almost mouthwatering, because sandalwood is a big like! Last news from Neela is the change of packaging. The new 60ml bottles you see in the pic here are designed by Pierre Dinand (who created the flacons of Opium, Paco Rabanne pour homme and many others). The dark one will house Mohur Concentrée, the light one will house the eaux de parfum. We have to wait till fall though for these news to hit the shops.

Another radiant star has joined the newborn Histoires d'Eaux constellation: Une belle Histoire. The chansonier inspiration goes on, this time singing Michel Fugain classic better known in Italy as "Un'estate fa" and speaks about citrus, sultry noons wearing leather sandals and linen pants immersed in the shade of the vegetation. Palmiro Peaquin tells me he imagined the composition that Françoise Caron's mastery in working with citrus translated into a rough opening with leather notes turning to summer shades. Mandarine, orange, bergamot, neroli and petitgrain cool down to a beautful spicy accord ruled by cardamom and coriander empowered by a sensual trace of cedarwood and sandalwood. So chic to win even who ofted find citrusses boring, this also goes straight in my summer wishlist. 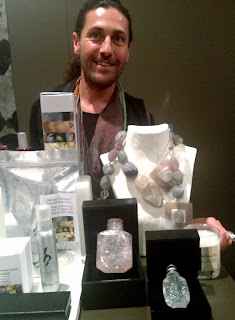 Who prefers incense for scenting rooms rather than as a personal scent like me will be pleasantly impressed by Olivier Durbano's home fragrances . The formulas are the same as the eaux de parfum assures Olivier, just fit for the practical spray and the candle to have the best diffusion in the room. I can't guess what a magical atmosphere must create Tourmaline Noire diffusing in a livingroom paved with warm woods and furnished with black leather couches. Another breaking news is the launch of 30ml flacons of parfum available now for all the fragrances of the Pièrres Poèmes collection that also changes packaging with a new, more elegant and useful one. The parfums concentration is twice the eau de parfums one and makes them almost like a balm melting on skin and revealing unexpected facets, more depth and an outstanding lasting power.
Invia tramite emailPostalo sul blogCondividi su TwitterCondividi su FacebookCondividi su Pinterest