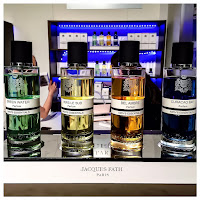 Jacques Fath
Iconic fashion designer who dressed Divas through the '40s and '50s, Jacques Fath loved beautiful women. So, it's not by chance beautiful women saved the Maison Jacques Fath. In fact the most beautiful present for a perfume lover was brought at Esxence by Cécile Zarokian and Panouge's artistic director Rania Naim who brought Jacques Fath back to the glory with Fath's Essentials. Gem of the line is Green Water, the first aromatic cologne in perfume history created by Master Perfumer Vincent Roubert in 1946. Cécile's rendition is masterful, shining with mint and a neroli overdose as precious as an emerald. 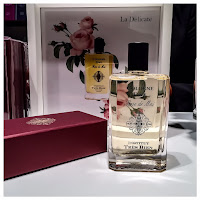 Institut Très Bien
Since ever colognes sum up the spirit of bien être and classicism in French perfumery. What to expect then from a House renowned for Beauty Spas and Eaux better than a new line of Cologne Fine? L’Inattendue Violette de Parme exalts the powderness of violet leaves brightened by the verdancy of galbanum while La Flamboyante Tubereuse Absolue reveals the vegetal crispness of the most intoxicating of white flowers. The most amazing? La Delicate Rose de Mai distilling a rosy dew uplifted by the acidulous sparkle of blackcurrant. 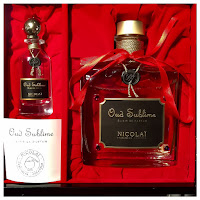 Parfums de Nicolaï
Esxence was literally flooded with oud (real and fake) perfumes this year but the best of all speaks french. I was surprised myself by the most refined (real) Cambodian oud themed perfume ever, Oud Sublime by Parfums de Nicolaï dressing the most indomitable wood in perfumery in silvery artemisia reflections. Wearing it to the La Dolce Vita themed Esxence official party, I got noticed for its refinement and got lots of compliments. 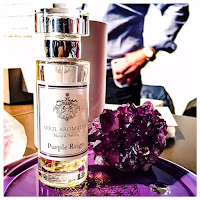 April Aromatics
Since years perfume junkies already know Tanja Bochnig, Berlinese natural perfumer, but at the first appearance at Esxence surely she got notices for her beautiful smile, but also for the last charming addition to the April Aromatics line, Purple Reign. More than a fairy Realm, this is a purple maze of osmanthus velvet walls, jade dragons and nocturnal beautiful flies. A neverending ring you won't regret getting lost in it. 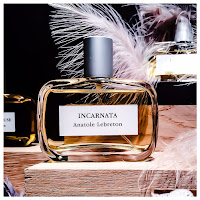 Anatole Lebreton
After his successful green legend, L'Eau de Merzhin inspired by mythical Breton druid Merlin, Anatole Lebreton brings to Milan for the first time another refined creation. Incarnata is the ultimate embodiment of the femme fatale, as cruel and seducing than ever. Old lipstick in a golden case and the voluptuous skin of a mistress. Fasten your seatbelts, it's gonna be a bumpy night! 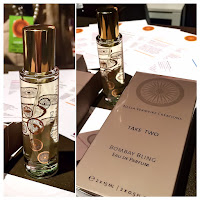 Neela Vermeire Creations
Born between France, India and UK, Neela Vermeire Creations let the fantasy travel with exotic adventurous atmospheres. A travel set now joins the line to make you fly in every sense: Take Two, two 15 ml flacons available in a fragrance of your choice among Ashoka, Bombay Bling and Pichola. Unmistakably signed in gold logos, they're perfect for sharing the fumes with your partner and friends, at home or on vacation.
Invia tramite emailPostalo sul blogCondividi su TwitterCondividi su FacebookCondividi su Pinterest