Perfumes Tasting - The taste of smell:
travelling with the senses

"Jean-Baptiste grabs the desired smells, opens the first bottle, pours out a full glass, brings it to his lips and drinks. He drinks the glass of fresh smell all in one and it's exquisite!"
P. Süskind - Perfume 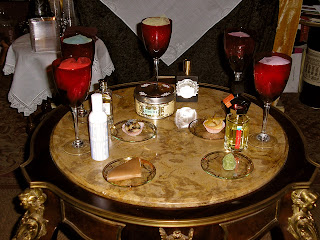 February 4, friday, 06.00pm, Catania: the dusk falls down, branched candlesticks light up at Boudoir 36 and through the warm candlelight on its red tapestries on the walls the invitation is to take off every mind structure to free the senses and let them be curious and explore smells and tastes in a tasting path that left many people surprised.
All the senses, not just taste and smell are involved in this path: everything from the background of fairy music by Yann Tiersen to the mise en place of the five proposed perfumes with the respective finger foods in the middle of the Boudoir focused all the attention to the steps of this journey.
In the mankind history, before perfumes got contaminated with edible smells, before gourmands full of caramel and chocolate, vanilla and cinnamon, it's been food itself to get contaminated by the world of perfumes. Since ever we use fragrances of the nature, aromatic plants having very few or not at all taste but lots of aroma, spices and flowers like safran or rose highly used in middle-eastern cooking: it's not by chance they are also commonly called "odours".
As a man passionate about cooking and perfumes, the couple smell-taste has always fascinated me and I was thinking about a way to experiment something involving both senses. When I received a helping hand on these themes by my friend Antonio Alessandria that has passion but also a huge olfactory culture and a training by the prestigious school Cinquième Sens, I was literally excited I could work with him to this polysensorial experience. Every idea, every proposal came up in such a synergistic way while choosing tastes and smells, about the presentation and the tasting to result in a very pleasant way to make olfactory culture within everyone's reach. 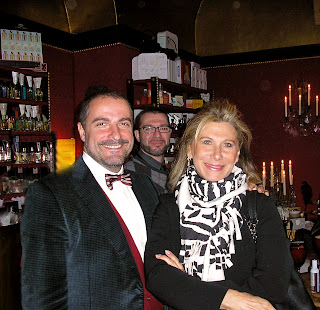 The first leg of the tasting with Sienne l'hiver by Eau d'Italie leads us in Tuscany, where florentine iris root marries white truffle and the slightly spiced guaiac wood to emphasize the idea of a rich yet edible underbrush, coupled with a savoury, almost mouthwatering facet of black olives with a hint of violets giving a cool and humid woody tone. The same sylvan impression has been recreated in a salty chestnut crêpe with its flourish and slightly woody aroma, made moist and fresh in mouth by a ricotta cream with a whiff of violet. Moreover the push of very green tones of black olives paté supports the tastiness of the scent and at the same time the violet-like sauciness coming up to the nose. The impact of coupling the perfume and the iris illusion made with chestnut flour plus violet was so real to make even someone doubt we could have sprayed Sienne l'hiver on the crêpe. 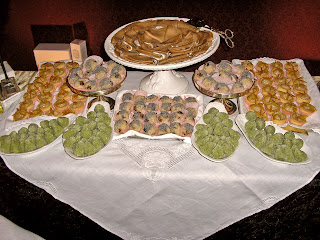 The second stop plunges us into the more intimate atmosphere of the gloom of a cathedral after high mass with Etro Messe de Minuit. Although the actual formulation is lighter in humid and musty gothic altar stone-like tones than the previous one, the perfume hasn't lost his evocative power thanks to the myhrr and incense base. While drawing it to a taste, we decided to keep it light but to perk up the aromatic green topnotes and the fruitier and sweeter facets as to let a ray of light coming from the polychrome stained glass windows break through the gloom. The pleasant contrast is given by basmati rice, which name in Hindi means "queen of fragrance" for its particular aroma, scented with coriander, also present in the topnotes of the fragrance and here giving a delicate airy touch together with a smoky peat-like sensation thanks to the whisky. Finally dried plum echoes the fruity sweetness of honey in Messe de minuit that makes it smooth from one side and from the other enhances the tastiness of the salty aspetcs. Its sweet and sour and umami taste enjoyed together with the smoky spires of the scent, made the contrasts brighter highlighting green and resinous notes that often are skipped in this perfume. 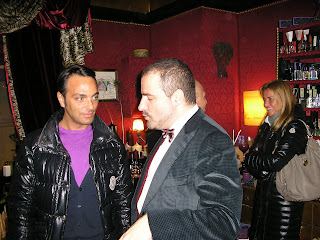 Also the Traktir tea by Kusmi Tea, originally a russian tea house has been particularly appreciated. In fact this black tea with a full bodied taste with citrus hints according to the russian tradition, was perfect to racall the palette of Duel by Annick Goutal. In this case the coupling is played enhancing the smoky sensation of black tea and even adding a good amount of tannins that ideally go well with the leathery facets of the scent. This astringent aspect later made it also perfect to reset the olfactory-gustatory palate through all the tasting.

And after more savoury or dry fragrances, Andy Tauer's Orange Star with its luminous and sparkling orange flower and aldehydes notes gives a juicy stinging blow of candied orange and mandarine peel. The distinctiveness of this citrus scent anyway consists in the very soft base notes of tonka bean, vanilla and musks that has been even more appreciated thanks to the creamy and fragrant gastronomic coupling. In fact only tasting a tartlet with tonka bean cream with a velvety texture, flavoured with orange blossom essence many people have really caught the nice balance of floral freshness and enveloping notes at the same time. The final sparkle was given by little pieces of candied orange and mandarine peel contrasting with the creamy base.

The sensory journey ends in Istambul, where according to the tradition were preserved the relics of Saint Agate (celebrated in those days) before they landed to Catania, where the rosy smell of loukoum mixed together with dried fruits floods the alleys down to the Bosphorus. Artisan Parfumeur's Traversé du Bosphore recreates all these gluttonous shades combining them with a smooth leather and iris base: what a better occasion to draw it to a traditional catanese taste? Here we go choosing to couple it to "olivetta di Sant'Agata" (Saint Agate small olives) but "in Costantinopoli" or revisited amplifying the middle eastern sensations adding pistachio, rose essence and safran that give fresh, fruity and floral tones surprising for the palate above all for how they rise up exalting the softness of such an original oriental, maybe the only real gournand scent of our path. Only this way one can fully comprehend how Bertrand Duchaufour succeded in catching the essence of the cultural link between western and eastern traditions of which the sicilian tastes are probably the highest smell and taste italian example.
Invia tramite emailPostalo sul blogCondividi su TwitterCondividi su FacebookCondividi su Pinterest