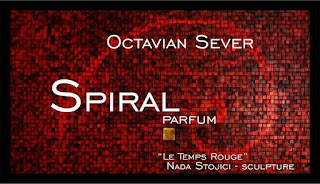 Long time ago, I started writing about fragrances but it wasn't here. Back in time, there were few webzines speaking about perfume culture. Then, while I was taking a hiatus trying to keep up my life in a sea of changes, the perfumed web literally boomed. There were more and more voices, yet the one I was eager to read in search of knowledge, the one I felt closer to my sensibility and that later pushed me to open this blog was the voice of the very knowledgeable Octavian Sever Coifan.
If it is true that systems influencing each other can originate resonance, surely I got many stimuli and positive vibes from him even if we never met. I was totally flattered to know I've been a stimulus for him even in in tiny amounts, so it's a big pleasure to me to invite you passing by Nürnberg in November, to discover SPIRAL Parfum Sculpture "Le Temps Rouge".

What's exactly about? It is an artistic project born from the collaboration between Octavian and the Romanian sculptor Nada Stojici. But let's try to better understand how it develops from Octavian own words.

Octavian: "What is ART if not the magic encounter between two universes which couldn’t meet elsewhere without the power of imagination which turns a “dream” into something “real”? The visible mirrors the invisible, blurring the lines between the real and the fantastic universe, between past memories and future.
SPIRAL is a perfume created to scent a sculpture installation carved from an unusual wood. The sculptures imagined by Nada Stojici represent the Sancta Sanctorum of the Inner Self, a puzzle of secret drawers, doors to future memories. Two works of the Artist represent the starting point of this creation – one offers the aesthetic configuration which organizes the perfume formula, while another explains the Genesis of the accord. It is the secret note, often captive in a drawer, in a perfume bottle or in our memory.

﻿
The olfactory inspiration for SPIRAL came from the harmony of two captive ingredients – an artificial Swiss molecule, entirely invented by man, and the captive note of a sacred Asian plant, barely used in Western perfumery in its pure form as it is used to anoint gold statues in Laos and has mystical properties. It is perhaps the most expensive and controversial perfume material from the Silk Road. In SPIRAL, one is the core, the other is the sparkle performing the metamorphose effect of the perfume formulation. From the dual action of these two universes, mirroring each other like a blooming lotus, I built the entire perfume. Like the spirals of a tree, I built the perfume in an organic and abstract way, but sculptural and subtle, almost intimate. The perfume composition is built around three themes: Genèse explores the birth of a Scent as collective memory, Synergy explores the aesthetic configuration being an entirely abstract new system of Scent composition, Arbor-essence explores the metamorphosis of an abstract essence into a material and figurative expression. They represent the tools I have constructed in order to make SPIRAL a real experience and to transpose the spatial configuration of the initial work of art created by Nada Stojici into the realm of perfumes."

﻿﻿
I wish to express my humble remerciements to all those who, directly or indirectly, are part of my life and the creative process behind SPIRAL. To FIRMENICH for their amazing discoveries and “secret” molecules part of this perfume since 2011, to Isabelle Doyen (she presented me several of the most astonishing jewels in perfume creation in Paris), to Yann Vasnier (London is my perfume and your creations are part of my life !), to Arcadi Boix Camps (your writings are an endless source of wisdom and beauty since 1978), to LMR France for their fabulous natural extracts. To Jean Kerleo and Guy Robert because they opened me the doors of the art of perfumes and were the last Masters of this Art. Again, this perfume would not be possible without YOU, those who believe in the Art of Perfumes, more than a phrase on a bottle or press release for an expensive product. I wish to thank you, Michelyn Camen and Ermano Picco for your friendship, it is very important for me. You are all in my heart and you inspire me! Several olfactory details and texts the following days when I'll have the pictures. The wood in the perfume is the imperial Xiang. 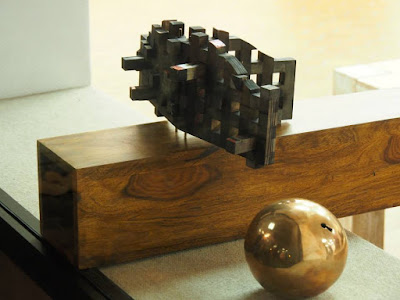