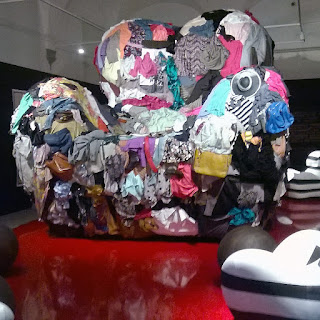 Come, see, touch, listen, smell, taste, excite! This is the invitation the artist Gaetano Pesce makes us celebrating his 60 years of career with the exhibition promoted by Comune di Firenze and curated by Sergio Risaliti and Vittorio Sgarbi Maestà Tradita 1956-2016, till February 8, 2017 at Museo Novecento in Florence.
While enjoying the irreverent creativity of Pesce, let me bring to your attention the particular multisensorial presentation that above all focuses on smell. In fact the Archistar wanted to collaborate with Leonardo Opali and his Atelier TAF, a volcanic, passionate Vicentin who moved his first olfactory steps at Smell Atelier. Knowing Leonardo since the first editions of Smell Festival in Bologna, I couln't help but asking him about this Amazing project. 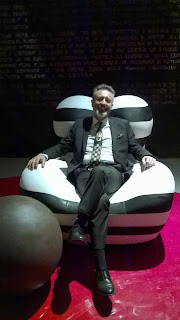 E: Congratulation Leonardo! I'm curious, how did you get in touch with the Maestro Pesce?
L: The telephone rung, on the display I saw “New York”. Maybe's Frances Middendorf or the director of the museum where we exhibited the last two projects in New York and in two Venetian Villas, I think. Instead it was the office of Architetto Pesce asking me whether it was possible to make the essence of everyday's work of a woman, to say her sweat. I replied: “Of course! The weirdest, the funnier”. In the beginning I wanted to stick with the idea of the Architect as much as possible, but when I sent him three proposals, he gave me carte blanche.

E: So crazy! So how did you develop the fragrance?
L: I immediately thought to what my friend Anna D’Errico neuroscientist at Max Planck Institute in Frankfurt said me, the olfactory chemical process of falling in love: actually love at first sight happens as love at first smell if we unconsciously sense the partner genetics is different enough to be able to generate healty children. Body odor so is what makes us comfortable facilitating the mating. I started then to reproduce a sweat accord somehow repelling to most of the people, but also a bit intriguing.
When someone ask me for an aphrodisiac perfume, I always get them what Luigi Cristiano told me about Roman Matrons: the went nuts for oil where sweaty bondages from the gladiators was put to macerate. Even nowadays a fresh sweat odor can be attractive once over twenty times. Problem is the other nineteen times! 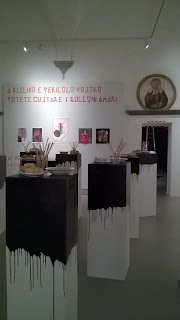 E: But how to properly balance the two opposite sensations so?
L: I had a clear idea: to make a fresh swear accord, dry, musky, without the typical dark notes of fermentation and decay. Then I could pour them little by little while testing the result on my customers passing by my perfume corner in Arzignano till I get the right mixture of repulsion and attraction. Maybe i scared some customer meanwhile, but the game was so fashinating.
As soon as I got to the one.over-twenty point, I was done to start the production of the scent. Given the great quantity needed, the production was made by a certified lab so to have all the legal documentation like a regular room spray that I called "“Fatigue”.
Now till February 8, 2017 you can go to Museo Novencento in Florence and smell it in the Stanza dei Sensi (the Chamber of Senses). Some will find it intriguing, some will find it nauseating.

After scenting the polysensorial works of Passion of Palladio by Frances Middendorf and Anna Boothe with the smell of Power inspired by Bonifacio Pojana in Villa Pojana, the smell of Neptune in Villa Venier Contarini and the smell of a religious woman as Elena Lucrezia Cornaro in Villa Corner, such a challenging project surely won't leave the visitors cold. Thank you Leonardo, now you got me even more curious to get into this Chamber of Senses! 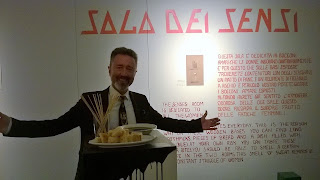