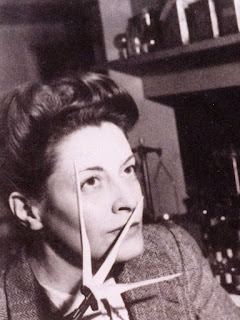 Working life has never been gentle to women, specially for the most technical positions. It's the case of perfumery employment where, aside a mysterious Madame Zede who created the first Lanvin perfumes and Jacqueline Fraysse, André Fraysse sister who worked for the fur makers Weil, there are almost no traces of women who imposed themselves before WWII. "Architecture is a job for men, but I always pretended that wasn't true" used to say one of my favorite designers, Gae Aulenti. Sagaciously applied to perfumery, the same motto perfectly fits to the greatest woman perfumer of the past century: Germaine Cellier.

Childhood and studies
Germaine was born in Bordeaux on January 26 1909. Her father George is a penniless bohemièn and her mother Jeanne, ethereal beauty with a strong temper, doesn't think twice at 40 to get back to work to make good the wasteful expenses of her husband. Maybe a capricious father and the resolute attitude of her mother shaped the temper of the little Germaine.
Afted attending a catholic school in Créon, in 1930 she moves to Paris together with the extravagant Catherine Mangelle, her cousine and childhood friend who soon became the mistress of the art dealer Irène Champigny. Their friendship will be surely significant to her camp approach to genders.
﻿
She attends the faculty of Chemistry but cannot resist to che charm of smells. Memories from the bordolese country with the smells of hay and the spicy flowers from the marseillese coast will be such a strong evocation that her thesis degree will focus on the classification of fractional distillation of synthesis products, a work that will immediately bring her to Argenteuil by the Roure Bertrand Dupont (now Givaudan) lab in the team of Monsieur Jean Sfiras.

The character and the cultured connections 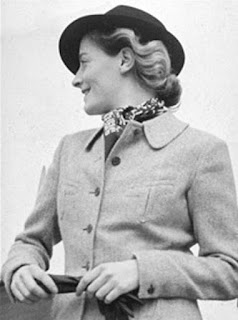 Blonde, lean, blue-eyed with peculiar features à la Cate Blanchett, Germaine Cellier immediately moves to Montparnasse. She loves the area and the life in the village populated by the artists of the time. Her undiluted verve, the cheeky humor without being vulgar and her fredom of thought made her a unique woman for the time. Thanks to this artistic attitude she becomes friend of the painter André Derain who will portray her, with Chas Laborde whose wife also worked at Roure and with Jean Oberlé who will introduce her to the tennis champion Christian Boussus, later her life partner (they never married though).
The people surrounding her will be a constant source of inspiration, friends like the writer Jean Cocteau and the actors Jean Marchat and François Périer. Moreover a deep friendship will bind Germaine to Yolande Lafon, the wife of Le Figaro director Pierre Brisson.

Later she moved to rue Boccador, at the heart of the fashion district where it was impossible not to notice her: Cléopâtre, Félix and Valentin, her three long haired teckel on a leash, she walked flawless in her beige Balmain suit or wearing a hat from her friend Rose Valois.

Sharp-tongued, between a puff of a cigarette and the next she didn't hesitate to judge relentlessly the creations of some colleagues to the point some meetings in Roure were memorable. Germaine was also a generous woman though, unable to be indiffenent to her close friends and collaborators. She liked to get lost downtown in Paris for the whole day while looking for an original present showing so her affection to a friend. She loved to walk barefoot in a nightgown at home, challenge Christian with crosswords and collect Delly novels. She didn't cook so often she had a chef at her orders. But she was also down to earth: she always knew how to pull her beans out of the fire and even during the tough years of the war she did her best to welcome her guests at best in the livingroom, entertained by her parrot singing "Ëtoile des neiges".
Working in Neuilly, she used to buy groceries at the local market: walking along the main road always before her assistants carrying some bags, the merchants nicknamed her the Grande Dame from the market of Neuilly.