In 1991 Parfums de Rosine reappeared under the arcades of the Palais Royal but the only heritage from the past was the capital R stolen from the Rose de Rosine flacon. There was nothing left of Poiret avantgarde aesthetics and fragrances, so Marie Helene Rogeon decided to write from scratch a new story for Rosine with contemporary creations based on the rose theme. Only recently the history of the brand has been rediscovered thanks to the Osmothèque activity, as pointed out by Jean-Claude Ellena while welcoming the guests attending the conference.
Enchanted by Jean Kerléo's lively telling, I follow him going back in time and in while we're in the '70s when arriving at the Patou headquarter in Saint Ouen, he found a box with perfumes left by Henri Alméras. Thanks to this and to the formulas that Yuri Gutsatz got by chance long time before, but above all thanks to Jean Kerléo and Guy Robert's commitment, from that case emerged eleven of the thirtysix known Rosine jewels.

﻿﻿
So how are this legendary Rosine? Do they smell old? I've always wondered about them myself. They're complex, sumptuous, painted in such vivid colours to turn pale every dull fragrance on the shelves, yet they're never in your face bearing a masterful balance and they're chic, terribly chic. Even the osmothecarians remastering them were shocked by such modernity because they're highly diffusive and full bodied to the point they foresee the gourmands in some case.
To establish its perfumes brand Poiret at first hired Maurice Shaller but as he left due to the WWI, a young chemist and glassmaker with no significant experience as a perfumer took his place: Henri Alméras. Both in Shaller and in Alméras creations there's a common ground made of balsams and exotic spices, scattered with aromatic hints keeping the opulence far from being cloying. The Poiret woman was not only dressed to impress, but she rejoiced at every little luxury detail and it can be felt also by the nose.

Maurice Shaller
Shaller style was highly influenced by Coty and his creations are even smoother, colorful and layered in dense, long formulas.

La Coupe d'Or (The golden cup - 1911?)
Hesperidic-ambery following the footsteps of Coty's Ambre Antique (1905) that will give way to a serie of fragrances among which Guerlain's Shalimar (1925). The opening is an impressive bergamot load like a sun beam, maybe empowered also by rosewood. The heart is a bit warmer with carnation unfolding its aromatic tarragon-like, honeyed rosy and spiced aspects. What's left on the paper blot after one week is a yummy base like a crème brulé dusted with tonka bean wrapped in powdery animal musks. 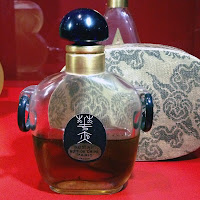 "Essayez Nuit de Chine - Madame - et vous ne direz pas qu'il est trop cher" it was advertised this way this sweet amber. The opening is sensual like a ripe plum liqueur, brightened by bergamot and a more floral peach hint. The heart is all about the eastern taste with a mix of warm, dry spices: freshly crumbled cinnamon, nutmeg and clove, almost medicinal. The base gives off a sweet powdery amber, embellished by sandalwood and earthy patchouli. Its dramatic trail foresees the '80s, shoulder pads included.

Henri Alméras
What's known about Alméras training is a brief period by Antoine Chiris. As Guy Robert writes in his "Le Sens du Parfum", sharing the lab with Ernest Beaux, Vincent Roubert and Henri Robert surely has given him more than some tips, providing him the fundaments of technique that, together with an extraordinary natural gift, made him a great perfumer.
His Rosine are more abstract and his formulas are far more stylized thanks to the use of bases. Aimed to dress the revolutionary synthetic molecules making them less brutal, the bases created by Marius Reboul for Givaudan and by Maurice Chevron for Chuit Naef were crucial at the dawning of perfumery. At that time is was normal for perfumers to share formulas and probably he learned from them how to play with them so nicely. There's much to say about his fragrances and their stories, but to make it short, let me just tell you about the two ones that most of all moved me. 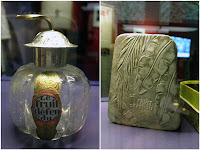 Every time I smell this ambery-floral-woody scent created during the WWI I am astonished at its beauty. Gourmand one century before Angel, the innovative use of gamma undecalactone, the so called aldehyde C14 patented in 1908 by Jukov and Schestakow and probably used here in the form of persicol Firmenich base makes it really avant-garde. To have a rough idea, think of the smell of a fine confectionery just baked buttery panettone with so much as candied fruits, icing and almonds, drenched in a peach liqueur. I still get my mouth watering thinking of it! 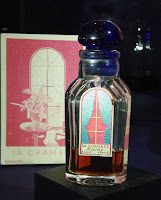 Sa Chambre is a late May morning. Sun breaks through the half open shatters letting the the perfume of roses and jasmin from the garden in, carried by the crisp air. May rose dipped in the mysterious De Laire miel blanc, radiates jasmin from Grasse with the kind of melancholic woody sweetness rendered also in a Lutens Rose. The evolution is surprising and gives itself up to the blue semi-darkness laying on soft iris pillows in a sandalwood and cedarwood bed (maybe with a tiny bit of incence too)  with leather hints. I glimpse a beautiful woman sleeping, her long hair loose (a touch of costus?) and I'm lost in her eyelashes.
Note: the Parfums de Rosine pictured here are part of the GS Collection and have been kindly made available to the Grasse Internazionale Museum of Perfumery as part of the exibition Paul Poiret (1879-1944) Couturier Parfumeur
Invia tramite emailPostalo sul blogCondividi su TwitterCondividi su FacebookCondividi su Pinterest