One of the advantages of being a friend of the Osmothèque Versailles is they send you invitations to take part to the interesting conferences they give during the year. Unfortunately it's not easy to join them coming from Italy, and often I end up kicking my ass like this winter when I read Jean Kerléo would have given a lecture about the mysterious Parfums de Rosine. Some occasions happen once in a lifetime, luckily others give you a second chance. In fact the Grasse Museum of Perfumery has made this event possible again to coincide with the opening of the exibition Paul Poiret (1879-1944) Couturier Parfumeur. This time I couldn't miss it, so the last Thursday I left together with my friend Nyneve, another reckless fragrance lover. Direction Grasse, La Gardenia goes Chez Poiret! 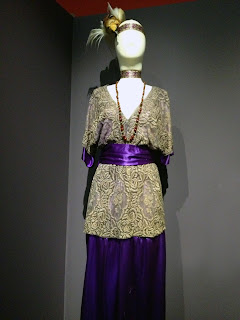 My wordplay in the title hiding two famous Poiret fragrances is just a way let you understand how much I was thrilled by this exibition mixing high fashion, art pieces owned by Poiret and his perfumed creations. Bearing the name of Poiret's eldest daughter dead before her time, Les Parfum de Rosine were officially introduced on June 24 in 1911, launched with a "One thousand and two nights" themed ball featuring more than 300 guests surrounded by the excesses for which Le Magnifique (that's how Poiret was called in Paris) was well known. Maurice Shaller (1888-1965) created on this purpose Nuit Persane which was given to each guest as a gift and never been sold leaving so no trace of its formula.
Poiret not only has been the first visionary couturier parfumeur thinking of perfumery and tailoring as arts, but he connected them to a total Lifestyle: fragrances often took inspiration from the wave of exoticism portrayed also in the russian ballets that would have charmed the learned Paris for more than twenty years. Also the packagings were small masterpieces of exquisite workmanship made by the École Martine (named after his second daughter), a school for less well-off girls artistically inclined. Above all they are the core of the exhibit at the Grasse Museum of Perfumery that will close end of September and my advice is you better don't miss it because I've seen so much beauty I was walking on the clouds in the end! Poor Nyneve, who knows how much I talked her head off on our trip back!


﻿
A life way out of line into balls animating the gossip back in time and making of Poiret a fashion designer-star ahead of his time known even in the States as The King of Fashion. Although he started the trend releasing women from girdles and draping them in opulent kimonos, he didn't realize the wind was changed after WWI giving way to the sharper silhouette of Patou and Chanel. So with the crisis and the Wall Street crash, diamond cascades and floods of champagne swept him away up to his neck in debts erasing the Maison Poiret and the scented gems I'm going to tell you about in the next post.