In the wake of Cleopatra 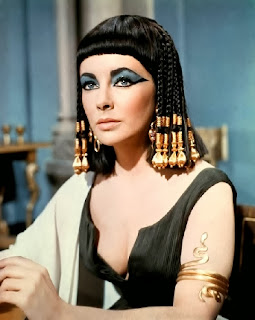 The last week I was in Rome for two busy days and nevertheless I had some spare time for visiting a place that was in my must-see list since longtime: the Chiostro del Bramante. By chance, this place where the time seems to have stopped guests till february 2014 an exhibition dedicated to Cleopatra VII who cast a spell not only on Caesar and Mark Antony, but on the whole Republic with her charme. Counting the number of fragrances inspired by her and given the legendary care she put in scenting herself (she even wrote herself a cookbook for ointments), could I miss it? 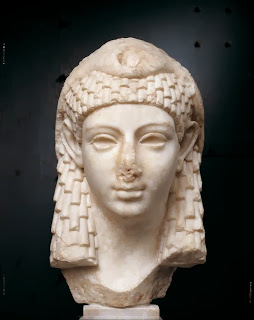 The beautiful exhibit starts from the marble head of a tolemaic woman attributed to Cleopatra and through a two floors path it shows how aegyptomania influenced arts and fashion during the rise and fall of this sensual queen. Together with mosaics featuring blooming lotus flowers and palms or frescos populated by ibis and crocodiles, also the roman matrons at that time surely played with jewels and hairdoos fit for a princess of the Nile.

Who knows how this affected perfumes, I thought looking at an alabaster unguentaria. For sure in a more and more luxury-addicted society there was a growing need for aegyptian perfumes like the Susinum (based on blue lotus, myhrr and cinnamon) that Cleopatra used to drench herself in. Pity in exhibitions like this they don't take in account the sense of smell and the key role perfumes played in everyday's life then. Ancient roman perfumers, the unguentarii, likely implied rare spices to concoct face powders and balsams with exotic names. avranno impiegato le spezie più ricercate per creare ciprie e balsami dai nomi esotici. In short that's exactly what happened at the beginning of the XX century, just think of the precious Djedi sarcophagus.

My though went to fragrances while looking to Ottavia, the defeated love rival who won on the battlefield, the wife whose seductive and diplomatic arms were futile against Mark Antony's love for Cleopatra.

"She came sailing up the river Cydnus in a barge with gilded stern and outspread sails of purple, while oars of silver beat time to the music of flutes and fifes and harps. She herself lay all along, under a canopy of cloth of gold, dressed as Venus in a picture, and beautiful young boys, like painted Cupids, stood on each side to fan her. Her maids were dressed like Sea Nymphs and Graces, some steering at the rudder, some working at the ropes...perfumes diffused themselves from the vessel to the shore, which was covered with multitudes, part following the galley up the river on either bank, part running out of the city to see the sight. The market place was quite emptied, and Antony at last was left alone sitting upon the tribunal while the word went, through all the multitude, that Venus was come to feast with Bacchus for the common good of Asia" - Plutarco


You can almost smell that fumes spreading from the boat. Was it some Kyphi to get Isis favour? Plutarc says Cleopatra was less beautiful than Octavia but he admits she was charming, learned and her voice was warm and sensual. I imagine her sillage this way, dense with opoponax, sweet with dates and honey and dark with incense. Such a bewitching trail would have inspired perfumers for more than two thousand years.
And what about Octavia? Who knows what was wearing Octavia while leaving Rome. Maybe she went for familiar smells, lentisc and roses from Paestum to desperately try to make Antony change his mind and get back home. Also the roman matrons beauty tricks have been widely explored as an inspiration for contemporary perfumes. A perfume lover can't help but fantasizing about the perfumes of two women who divided the empire. And you, how do you imagine them?
Invia tramite emailPostalo sul blogCondividi su TwitterCondividi su FacebookCondividi su Pinterest