﻿
The end of WWII was an awaited moment by both winners and vanquished. The conflict heavily tried the Europe, torn apart by the angst well pictured in artworks like Guernica. On the other hand when the war ended perfumery would have fed the longing for serenity and optimism with great energy also glancing again overseas. Even a sorceress skilled in ferocoius poisons à la Bandit like Germaine Cellier would have concocted her brightest juice for Nina Ricci, Coeur-Joie's sunny violet. It's time for hopeful names like Avon's Wishing, Air Nouveau (new air) by Houbigant and many others. The house of Jean Patou replied with L'Heure Attendue, the awaited hour surprising with unexpected paths instead of going for lightness. 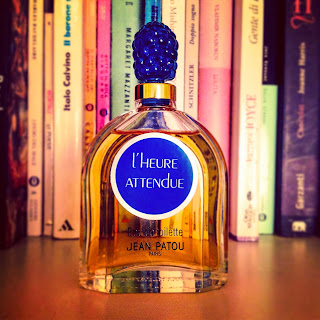 It's a curious choice to celebrate peace with a woody chypre, isn't it? In 1946 at ten years from the couturier's death and after Henri Alméras, incurable pacifist retired leaving Paris under the bombs, also the Maison Patou was looking for a revival. So the freshly appointed in-house perfumer Henri Giboulet was asked to propose a new creation in a short time. Maybe perfumers of that time weren't as genius as nowadays ones who are able to make ten fragrances per year. Maybe due to the complexity of formulas and the care in choosing raw materials a creation took years to be perfected. Surely time has been crucial so under Giboulet's direction the most obvious choice was to draw formulas from the house heritage. The woody theme fashionable between the two wars and Alméras signature are pretty clear. Also Jean Kerléo, who created the eau de toilette in the '80s basing upon the original formula confirmed it to me.

It's difficult to give a pyramid, but among the ones online I mostly agree with Jan Moran's "Fabulous Fragrances" one. Here it is:
﻿
Fortunately my vintage eau de toilette is still good and bergamot shines together with a Givaudan aldehydic base also nested in the topnotes of Amour Amour. This pinch of love speaks of lilac and small yellow flowers blooming here and there through the roots of a magnificent Mysore stool. Sandalwood, here present in quantity and quality impossible to find nowadays pervades all the fragrance with its toasted greeness and irradiates a sense of serenity and fulfilment if not of joy. Florals, rose, jasmin, carnation and narcissus are a faint memory of Chaldée and whisper just enough to round off the dramatic chypre accord joined by the warmth of patounade. Everything is wrapped up in the warm gloom of opoponax shifting eastern the atmosphere, to sumptuous palaces rooms with dark furniture. Few drops on the skin and the breath slows down to get its reflections. Resins and incens burn while eating spicy cookies and reading ancient sanskrit poems about the origins of the world, letting wine and wisdom flow to the soul.
Invia tramite emailPostalo sul blogCondividi su TwitterCondividi su FacebookCondividi su Pinterest