"One cannot be forever innovating. I want to create classics" Coco Chanel

﻿
If elegance had a smell, that would certainly be the scent of iris. It's simple because it comes from earth, it's precious because it takes a long process to extract it from iris pallida root and it conveys the grace of Canova's marbles and the tenuousness of georgette. Two fragrances led it shine most of all: Fath's Iris Gris (Vincent Roubert) and Chanel Nº 19. Thanks to a crazy amount of iris butter melt with a little more than a whiff of peach, the first romantically renders the rosy cheeks of a girl. Lean and classy in her immaculate muslin shirt, Nº 19 instead is a proud beauty sculpted by Henri Robert according to Coco's rule saying it is always better to be slightly underdressed to be elegant. That's exactly how it makes me feel, effortlessly chic, simply flawless.
More than 40 years have passed since that May 5th 1921 and Coco was determinated to launch a new great classic to celebrate the recovery of the fashion house. Headstrong like a perfect Leo, she worked on it going through difficulties and many trials and ended it only in 1970, few months before dying. Nº 19 is named after her birthday and today she would have been 130 years old therefore I'm going to wear it for a toast. Joyeux anniversaire Madamoiselle! 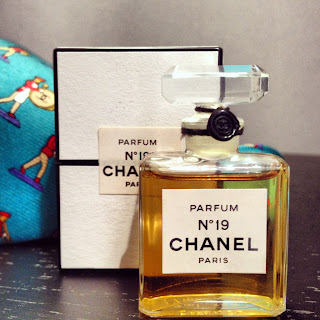 Classically composed, this green floral is a masterpiece highlighting what a creative genius Henri Robert was, above all for the innovative use of well known materials. On top there's the galbanum green discord, less aggressive than in Vent Vert here with bergamot and a moist shade of hyacinth taming it. The heart is softened by the feminine, slightly soapy freshness of neroli, May rose and by a famous muguet base made by Robert himself and nested also in Hermès's Calèche (Guy Robert). Narcissus provides its silkness across green, petal and stable and acts as a perfect go-between galbanum, iris and the chypreish base (not being a chypre though). Ahead of his time, Robert had a genius insight to take a 15 years old molecule usually used in small amounts, hedione pourring in up to more than 20% which led the duskiness of iris overdosed float over a rough, mossy vetiver. The dry fluffy effect was so disruptive to later influence many fragrances like Estee Lauder's Beautiful (Sophia Grojsman and Bernard Chant), Heure Exquise (Annick Goutal and Henri Sorsana) and even Prada's Infusion d'Iris (Daniela Andrier) and Nº 19 Poudré (Jacques Polge) which shows it hasn't lost its charm even after thirty years. No aldenydes, no patchouli, almost no musks, just few pinches of isobutyl quinoleine, sandalwood and jasmin give it a beautiful leathery illusion. Last modernity: the ambery touch of fixateur 404 keeps its purplish brightness. This is an example of how naturals and synthetics seamlessly melt can generate an abstract work of art when there are no fixed limits to creativity.

Reading the beautiful review at Bois de Jasmin, I argued the parfum and eau de toilette versions I found must be from the '70s because the liquid is deep green. Also both Emmanuelle Giron and Cristiano Canali from the Osmothèque smelling it agreed the quality of galbanum in it is outstanding, bright, sappy, more balsamic than earthy. In fact it seems Chanel originally sourced it from a particular grower in Iran and due to the revolution in '79 they had to reformulate it. Now that the liquid is golden and a lot of reformulations have flowed under the bridge, Nº 19 is more ambery and musky and less androginous, above all the eau de parfum with a clearly more floral heart. However it hasn't lost its original imprint and nowadays is totally suitable for a man who will better go for the icy clarity of eau de toilette. My advice to the girls instead is to go for the pure perfume, worn with a jeans and a little jacket because, as Coco said, a girl should be two things: classy and fabulous.
﻿ 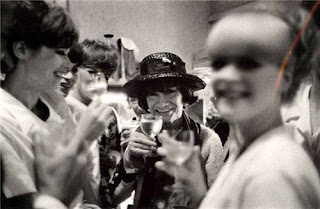