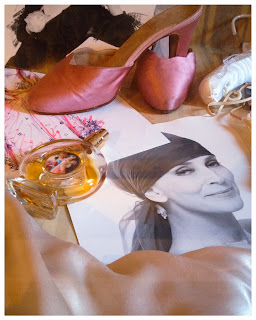 Think of the astonishment of baroque art and you'll have an idea of what to me is Bal à Versailles: the same way one's eye can get lost in the opulence of Rubens, the nose is run over by thousand magnificent facets. Also baroque as synonime of odd fits it perfectly as you can realize just reading the comments online describing it as sensual and animalic or even kinky and nasty for who's grown breathing white musks only. Despite the original formula has been widely reformulated, Bal à Versailles footprint still stands out of the crowd of the bleached modernity ruling the shelves nowadays.
It's not difficult to figure out its teatrical sillage as the aura of a great Diva like Valentina Cortese, a complement to her unique style and her fabulous outfits from Capucci, Dior, Galante, Ferré and Mila Schön. Walking through her beautiful dresses on show till the last week at Palazzo Morando, I found out it's the perfume she still wears everyday. So I got back home and dabbed few drops of my '70s vintage parfum de toilette to describe you its magic. 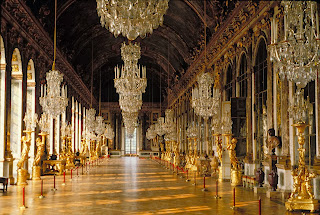 Greener and brighter than during the roaring twenties, in1962 aldehidic florals were having a revamp thanks also to the new syntetics and bases created after the WWII. With Bal à Versailles Jean Desprez seemed to keep distance from commercial successes like Madame Rochas, Chant d'Aromes, Capricci and Calèche. Thanks to his very personal style and to his mastery, he winks to classic florientals like Narcisse Noir de Caron and Patou Chaldée, revisited though with the patchouli on steroids introduced by Youth Dew. Taking inspiration from the hall of mirrors in Versailles he will concoct a powerful and refined nectar capturing the sumptuous balls of the Palace with powdered ladies twirling in crinolines, golden stucco works and french-polished woods.

It's hard to describe Bal à Versailles as top-heart-base notes because after a citrus and neroli accent on top, it unfolds its baroque symphony of iridescent specks shining with the silkness of orange blossom and orris or the sweet decay of jasmin and ylang-ylang and the creaminess of Mysore sandalwood and benzoin. Wearing it is a neverdending discovery because of the caleidoscope of subtle sensation it reveals: the almost medicinal piquancy of clove and cinnamon, the herbal bitterness of rosemary running through the inky lines of oakmoss or the impression of the sun stretching on waxed wooden floors, or again the dangerous pungency of ambergris speaking of sheds and stable boys beyond the flowerbeds of the Petit Trianon. 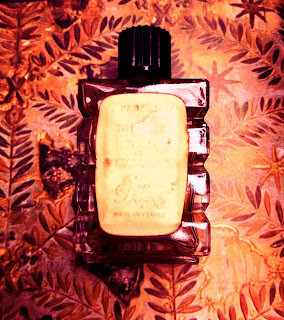 My parfum de toilette has the same lasting power of a pure perfume from nowadays and enhances the ambery, powdery-floral character. Thanks to a kind friend who sent me a small decant of his eau de cologne vintage, I was able to make a comparison with it. The juice fades quicker but the opening is powerful with citrus and civet in an almost fauvist way. Despite the lower fidelity remastering of the current version, it still shines with a big sillage, like  a great Diva entrance. Here are the notes (from the Jean Desprez website).