Like messages in a bottle, the emotions a creator succeed to express in a perfume can be felt strong and clear by careful people. Intense, that's how I perceived Mon nom est Rouge at first sniff. Instantly I guessed it was about a deep-rooted strong feeling, but to better understand it I wanted to read the beautiful novel from the turkish Nobel prize Orhan Pahmuk which inspired Majda Bekkali. Pahmuk weaves a thick tapestry where each character is like a differently coloured thread telling its point of view in the story, the story of a murder. The real themes though are islamic art and culture clashing and melting together with the western ones. Parisian with north-african ancestors, Majda tells that pages touched her deeply bringing up her roots and so inspiring her the perfume. Mybe it's because of this common ground halfway between East and West that Majda chose Cécile Zarokian to work with on her concept. 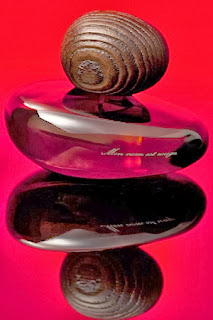 When I tried Mon nom est Rouge for the first time, I was with Majda and Cécile and what instantly striked me aside being a sillage monster, was a familiar aroma that I couldn't recognize at first. The magic of perfume lies also in this: it tells everybody an intimate story and therefore unique. While I'm trying to identify what's the familiar smell, Cécile explains me she used spices to render the idea of red and oriental and that the orange I get comes from a good amount of elemì, a powerful resin I like for its discrete peppery tone and for its texture always making me think of the white glueish sap of certain trees. I clearly detect
the medicinal facet of cinnamon, pink pepper and cardamome while I barely get turkish rose just because of the metallic glares it radiates so overloaded by geraniol. The mineral sparkle of C12 MNA aldehyde on top though already announces the weft of this tapestry will tighten with a bit of cruelty in the thick knots of incense and cashmeran wrapped in a slightly retro animalic tobacco cloud.

﻿
Suddenly i get it! Eureka! Here it is the familiar smell, the opening citrus-aromatic blast so invigorating, red as passion is Campari! I understood the reason it reminds me of Campari only a few weeks later visiting an exhibition on the story of the Made in Italy. The ingredients featured in the original Gaspare Campari's recipe (1860) were all there under my nose: the citrusy dinnaty, cinnamon and rose, the sharp aromatic mugwort and quassia with its balsamic bitterness. Finally I could discharge my nose. The likeness is not so daring then if you think in ancient times perfumers often used to concoct also tablets, tonics, poisons and colognes. Unfortunately Cécile told me she never tasted a Campari so I promised her we will work about it next time we meet, toasting to the vigour this sip of Orient gives me every time.
Invia tramite emailPostalo sul blogCondividi su TwitterCondividi su FacebookCondividi su Pinterest