I wrote this review published on CaFleureBon Modern Masterpieces column and I'm happy to finally share it also here. It's all naked truth.
Set against a Da Vinci-like immaculate black, the imperfection of bodies becomes the most sublime form of raw sexuality in Mustafa Sabbagh's art.  Smelling Féminité du Bois I can’t think of a better description than Mustafa’s words “imperfection is truth”. Back in 1992, juxtaposing the poignant side of flowers and woods, eternal sexual symbols set in a neo-deco bois pour femme, Feminité du Bois revealed the masculine side of femininity and vice-versa like a newborn olfactory Lady with an ermine.

Everything started in Morocco back in 1968, when the Young Serge Lutens, who was there, let’s say for a love affair,  found a piece of wood and fell in love with its smell. “One day I’ll make a perfume called Cèdre” – he said.  So Féminité du Bois was born when Serge Lutens met Pierre Bourdon who, since the late eighties, was exploring at Quest the idea of a composition based on a fruity wood. The concept was then developed together with Christopher Sheldrake (who is considered the in-house Perfumer). As M. Lutens says, “the perfume wants to deliver the deep message of Cedarwood, naked, unadorned”.
While revealing the naked truth of the wood itself, the fragrance became revolutionary because of its different approach to perfumery.  Féminité du Bois interpreted the unisex trend of the early nineties in a totally different way.

As a reaction to the spreading of the HIV virus and to AIDS, this was an era when sensual sexy animalic fragrances were eschewed and genderless healthy “fresh” smells were created to appeal to both sexes. Perfume became utterly antispetic and lost its connection with its medium, the skin.
Féminité du Bois' first rendition was a deeply human smell featuring a resinous cedarwood backbone (it is said it accounted for 60% of the composition) with a radiating honeyed amber flesh coated with a spiced candied violets and lovely orange blossom complexion. It was break with both tradition and the upcoming unisex mainstream and presented a sexual perfume with both masculine and feminine elements. 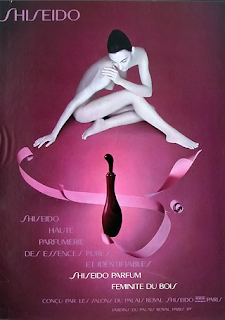 Moreover it set the foundation of the Lutens signature for Les Eaux Boisées, Bois de Violette, Bois et Fruits, Bois et Muscs and inspired compositions like Chêne,  and Miel de Bois. The trend for woody-fruity fragrances which began with Féminité du Bois gave birth to a stream of beautiful interpretations of the theme, such as Dior Dolce Vita (also composed by Pierre Bourdon), Estée Lauder Sensuous, Miller et Bertaux #01 Parfum Trouvé and Jovoy L’Enfant Terrible.
In addition to the Eau Timide flanker, of course Féminité du Bois went through more than one rework and repackaging (the first dark bottles were designed by Serge Lutens himself), both under the Shiseido and the Serge Lutens label getting softer and softer. In comparison with the 1992 version, the transparent bottle of 2009 reveals a thinner formula where the sheer pepperiness of iso-e super (more than 40%) partially backs up the tamed spices. The violets floralcy is enhanced instead, resulting in a still tremendously longlasting yet fading ghost of this former beauty.