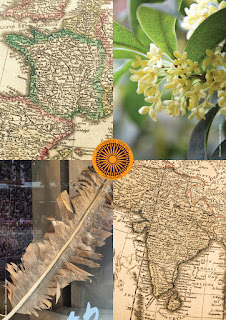 Since it's finally available on the shelves, I am proud to share with you my review appeared the last month on ÇaFleureBon.
A dear friend who proudly runs a beautiful perfume shop always says while holding a perfume bottle, spraying it, she holds in her hands more than a fragrant liquid. The heart of who made it is in every flacon and this is more than truth when speaking of Creative Director Neela Vermeire eponymous brand. One cannot think of her creations and herself as Neela puts a little piece of her soul in every scent that bears her name.
Sharing her passion for classical music, I couldn’t help but smelling her newest and soon to be released perfume Rahele and thinking of pastel tinged Louis XV exotic interiors framing in gold swirls peasants in turban, rhinoceros and elephants over mother of pearl mirrors. Delicate yet opulent like Jean-Philippe Rameau’s music, the perfume dances like damsels dressed in small floral pattern textiles almost stolen from the Moghul ornaments.


During the reign of Louis XIV three travelers, Francois Bernier, Jean-Baptiste Tavernier and Jean Thévenot following their adventurous spirit and curiosity were among the first French men to visit India. Bernier (1620–1688) was physician to the eldest son of Shah Jahan and, more widely, to the court during his 12-year stay in India. Tavernier (1605-1689) was a gem merchant of Belgian descent who funded his own travels to the East and sold to the Sun King the legendary Tavernier blue diamond (now known as The Hope Diamond) used as a centerpiece in the French crown. Thévenot (1633-1667), was a linguist and botanist. The travels of Monsieur Thévenot into the Levant describes in detail his observations during his travels. This book was the first part of his Voyages and was published while he was alive. The other two parts of Thévenot’s Voyages were published posthumously. The Journey memoirs that the three travelers wrote, were exquisitely detailed diaries and observations during their staying in the Mughal Empire; they have become legend and highly influenced arts and culture for the next two centuries.

Rahele, which means "traveler" in Persian perfectly reflects this inspiration. In fact compared to the previous creations in the line beautifully rolled in spices and balms, sprinkled with fresh pulpy mangoes and scattered in opulent petals, Rahele immediately feels more European, like a memoir written by a French Aristocrat. The Tavernier diamond used as a centerpiece of the perfume is apricot-tinged osmanthus that perfumer Bertrand Duchaufour put in a neo-chypre frame to highlight all its milk-dashed tea green sparkle. Surprisingly the result is luminous with crisp bergamot and cardamom deeply resonating in the opening.
All the French Baroque elegance is brought by a beautiful bouquet of cinnamon dusted violets redolent of the face powders where the crushed petals soapiness was coupled with the red tinged spice to blush the porcelain cheekbones of the courtesans. The heart of the fragrance is laced with the Mughal Empire heritage of Mohur with which Rahele shares the rose-laddu yumminess. The base of the fragrance is very gentle with the chypre theme turning to a tobacco tinged cream infused with sandalwood and sheer patchouli.
﻿﻿
﻿﻿The finishing touch to the toilette of the perfect Baroque Demoiselle is the leather echo of violet leaves as gentle as cuir pleine fleur gloves empowered by touches of styrax and saffron echoing refined jewel-inspired leather, Ann Gerard’s Cuir de Nacre. While keeping the trademark refinement and complexity standards, Rahele is the most western fragrance in the line and represents an interesting access point for who’s not acquainted with Neela Vermeire Creations. Rahele has above average longevity and the discreet sillage is like a halo hovering over you, drawing everyone closer.