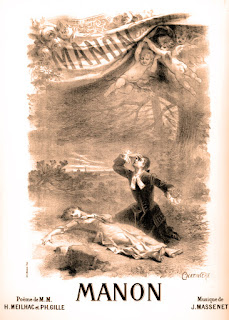 Does it happen you to make liberal associations between perfumes and other art expressions too? Sometimes it's a painting or a picture, some others it's music. Often it happens by chance and the connection it's so evident that's impossible to ignore. Just by chance I found the most famous Jean Patou perfume, Joy, in its original eau de toilette formula one week before receiving an invitation for the Scala to see Manon by Massenet. The invitation sung by Manon to enjoy youth and the french taste for which Massenet and Patou were masters (Massenet died in 1912, the year Patou started creating dresses) are just two of the many reasons of this perfect match.


﻿
Whilst the novel of Manon ends tragically in America, the story of Joy starts right there. With the crisis in '29 and the Wall Street crash, Patou had to close his boutique overseas but such a daring and charming man loving roaring racing cars and sports couldn't give up. So he went to Henri Alméras and said: "Forget the fact that we are under pressure and our sales are diminishing. Use only the best raw materials as much as you wish to make a gift for our clients who won't be able to come to Paris this year". The perfumer started elaborating floral accords he was probably working on since 1926 following the success of Amour Amour. Such huge was the amount of May rose, bulgarian rose and jasmin grandiflorum from Grasse pourred in the first mod, that Alméras himself judged it too expensive to be marketed. But as you can read in a monographic post by Octavian Coifan, Alméras was at least as daring and seducing as Patou and decided to accept the challenge.

Smelling it together with his frend the gossip and party queen Elsa Maxwell, Jean Patou got so impressed that he asked to increase the amount of naturals. According to a famous formula Alméras mixed "10.600 jasmin flowers and 28 dozen roses" to have 30 ml of parfume. This formula made Elsa coin the slogan "Joy, the costliest perfume in the world". The gift arrived in 1930 and was available at the parisian boutique only in the beginningin, welcomed with the same optimistic wave of Manon praising love and roses. Craving for beauty and delight like Manon Lascaut and ravished by the irresistible scent, the wealthy american clients forgot about the economic slump allowing this way the House of Patou to survive. 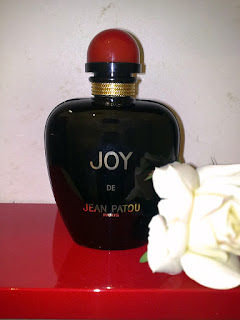 Like Massenet score takes the musical style from the previous century to twist it with daring fin de siècle sparkle, this masterpiece revives the classic rose-jasmine floral theme but adds a timeless freshness, regardless of the trend of the period and this is probably the first reason of its great success. In Joy jasmin from Grasse is overdosed in tremendous proportions and it is handled like a huge diamond where the rest is rationed with extreme delicacy to let it shine in thousand reflections.
May rose and aldehydes in the opening give a greener impression recalling the soapiness of honeysuckle. The clean vibe of the fresh cheeks of a girl joins the slightly waxy aspect of aldehydes hinting this way to the unctuousness of jasmin, the crispness of its rosy buds. The heart discloses finally its treasure: a sublime jasmin, smooth and never heavy, greener in the top with a banana peel hint, then sweeter with a plum facet given by damask rose. In the base stealthy ylang-ylang and tuberose purr without playing openly, laying on a lightweight Mysore sandalwood and golden civet pillow. Its opaline mood tinges a floral accord that's far more animalic in the vintage extrait de parfum but here is more rarified than ever. That's Alméras olfactory signature, the so called "Patou melody" running through many of his creations among which the spicy Divine Follie and even my beloved L'Heure Attendue, a stunning balmy chypre.


The first flacon housing the parfum was the art deco one designed by the architect Louis Süe, still used nowadays. Joy has been bottled in various flacons later on, among which the one designed in 1932 by Patou himself, round shaped with a red cap inspired by chinese "snuff" bottles. My eau de toilette one is from the seventies.
The last analogy with Manon, the most mocking one, is that the novel written in 1731 by the Abbé Prevost was instantly censored by the church for the scabrous arguments it dealt with. Likewise recently IFRA has put his eyes on jasmin as a raw material to be censored. This translated in hard restrictions in using it. Don't get me wrong, the current edition of Joy is pleasant but it's far away from its original spirit. Extremism has never been good for art but whether censorship wrapped Manon in an even more intriguing sinful aura, unfortunately for the Joy addicted there will be only the tragic end: being content just to smell it at the Osmothèque.