"Pink it's my new obsession, pink it's not even a question" - Aerosmith 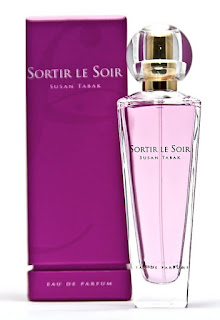 About a month ago while I was in the Marais in Paris, aside smelling everything I planned, I availed myself of the opportunity to peep through the shelves looking for unknown fragrances. So as I was at Sens Unique, after checking out Elisabeth de Feydeau's beautiful candles inspired by the Palace of Versailles, I led my curiosity sweep around.
Seldom I pay attention to gaudy or coquettish packagings, nevertheless by then my eye fell on an unfamiliar shocking pink box so I told myself: "You don't come to Paris everyday, so stop being snob and smell it if you're so curious about it". So I asked to the kind shop assistant what's it. "Sortir le Soir de Susan Tabak" she replied. Moral: let always your nose judge a perfume, not your sight!
Susan Tabak's name maybe means a lot to the american fashion addicted but I must confess I never heard it before. Susan is a glamourous newyorkese lady that's considered since years one of the most influent luxury experts. Founder of her own media company, Susan shares through it her point of view about fashion, dining, art and nightlife. She's also the author of "Chic in Paris" one of the bibbles for the US shopaholics but she even has collaborations with various designers and regularly attends to catwalks and parties. Susan is also an appreciated personal shopper but above all shes exquisite and kind and since she was recently here in Milan for the fashion week, I had the pleasure to meet her and satisfy my curiosity. 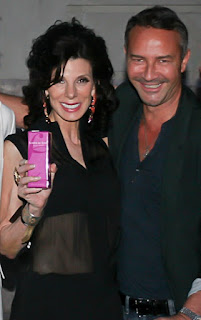 E: "Susan I confess I didn't know who you are and I bumped into Sortir le Soir by chance, so I immediately wondered if you have always been passionate about perfumes"
S: "To tell the truth no, I never cared that much about it. Of course I wore perfumes but often they were gifts I liked, for example Chanel No. 5. Then I was to another party and they gave away as a present bottles of Michael Kors. I don't like Kors design, but I liked the perfume"
E: "It's a tuberose if memory serves, isn't it?"
S: "Exactly, it's a tuberose. Wearing it I realized people noticed it and someone asked me what I was wearing, so I started paying attention to it. Anyway I never had a particular interest about perfumes before, but now I do, I check out packagings, fragrances etc."
E: "And how did you get the inspiration to create a perfume and why did you happen to work with Françoise Caron?"
S: "You see, it's been by chance. An evening I was at a party and they were launching a new scented candles line. I was with some friends and we smelled them and a friend said - Susan why don't you make a scented candle too, it would be nice - So I thought why not. I got in touch with the people who did the launch and one day we went together to Paris for this project. We smelled some candles but in the end I felt a candle didn't suit me. There I met Françoise that told me her family is involved into perfumery since more than sixty years. I was impressed so I thought I could work with her to create something suitable to me, a perfume with everything I like. So we started working together, then smelling different trials I chose the one I felt it was more me. Also for the name I wanted something representing myself and thinking about it in the end, well, I love going out at evening, so I went for Sortir le Soir"

The fragrance is based on the idea of gardenia, not a realistic one though, rather a stylized flower. If to Jean-Claude Ellena "The smell of gardenia is a drama that's played between jasmin and tuberose", to Françoise Caron is without doubts is a dramma giocoso. In fact I've been impressed by the modern and amused interpretation she gives of a classic soliflore that's usually not for everyone. In Sortir le Soir, what could easily fall one step from vulgarity, become a tropical pleaser or simply be "too much", in the hands of an artist like Françoise Caron becomes a surprisingly chic bunch of white flowers, bright and intriguing.
The opening is crispy with bergamot and mandarine that bring a moist greeness infused with a juicy and tasty aspect. Just think as the soaked vegetation of Fleur de liane would bloom with hundreds white flowers: crystal clear freesia, magnolia and orange blossom joined by a sensual jasmin render the idea of a big dewy gardenia just warmed by the sun. The contrast between the dewy and the dry facets of the scent is so tactile to conjure up images of water drops running on a pink crêpe georgette drape. Where the opening is decidedly fresh and modern, the heart gets warmer and shows the heritage of the big florals from the eighties like Jardins de Bagatelle and Amarige here updated by a more airy texture. A powdery cocktail of muscs and vanilla made sparkling by ambery woods and elegant mineral hints empowers the florals and glues them to the skin for long time. The sillage is incredible and just few drops are enough to get ready for the party, to get ready for Sortir le Soir.

Inspired by the pink post, even if late I decided to celebrate the women's day: just leave a comment here and the next week I will draw five samples of Sortir le Soir among all the women. Good luck!

Ermano, the fragrance sounds very interesting. I have never heard about it before. Now, is it only available in France? I appreciate to be included in the draw:)
Thanks

Came over from FFF, and have to admit, I've never heard of this fragrance before. But I'm new to the awesomeness that is tuberose, so I'm totally game for the draw.

The lucky winners of the decants are Bettina, Dionne, Marzipan, Saraprfms e Stefania. Could you be so kind and leave me your address here in a comment (I won't post it) or via e-mail at magnifiscent@gmail.com?
Thank you again for participating my friends!

yay, thanks a lot