﻿
In the beginning was the bronze age of digital perfumery: distribution was confidential and selective as a matter of fact. At that time it took years for a brand to launch a new fragrance and only the long time houses offered more than three-four perfumes. Then it came Opium and fragrances became pret-à-porter: launches multiplied and entering a perfume shop was a less and less confidential and even less selective. The iron age starts in 1983 with Michael Edwards Fragrance Wheel, born on paper to classify fragrances by olfactory families and later used to support sales points in advicing customers. The discovery of America though comes with the big apple, the one from Cupertino: in 2010 Givaudan launches iPerfumer, the first app for iPhone designed to help chosing a fragrance also based on families. The last technology edge is called Nose and runs on iPad. Could the perfume nerd in me resist to discover what is it about? So I went to nose in corso Magenta at Pérfume a couple of months ago, right before the official launch at Esxence. 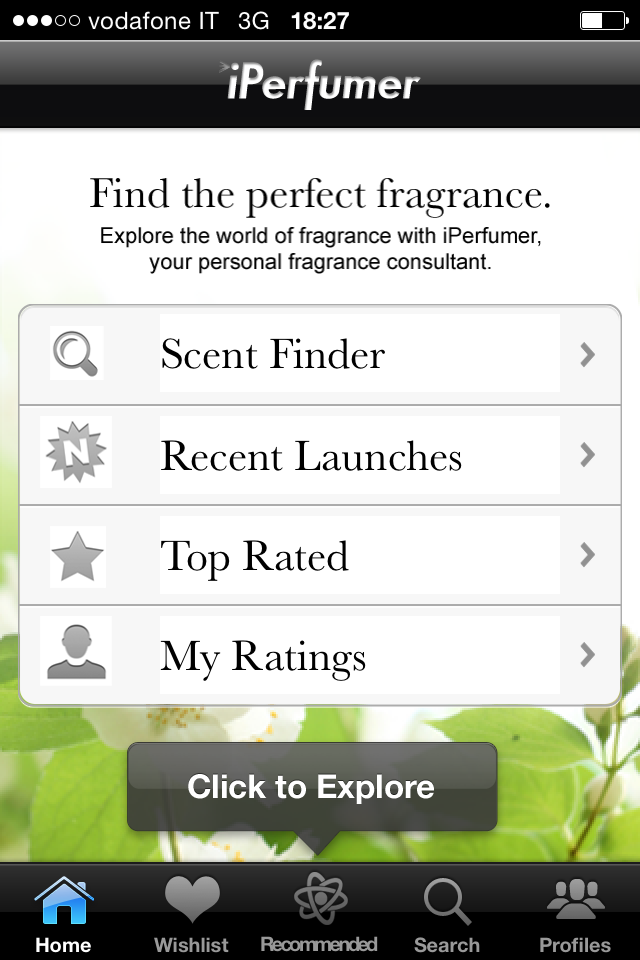 Nose System is a patent created by the owners of Nose (among which Silvio Levi, Mark Buxton, Romano Ricci, and Nicolas Cloutier) for their parisian shop and now it is spreading in various shops around Europe. The good thing is everywhere you go, you can retrieve your profile in the cloud and update it with new scented clouds.
In a nutshel for the tech-jeeks, it is about an expert system based on a database counting more than 7500 fragrances and, after a minimum training it allows to have with a certain likelihood an olfactory diagnosis made of proposals fitting the customer's taste.

To cast out nines, I sat down sipping amarone with Nicolas Cloutier and the beautiful Giulietta from Pérfume and had some fun stressing the system. After giving a few information about my sex and provenience, I get off to a good start inserting Mon Nom est Rouge, Tabac Blond e Fougère Bengale as fragrances I recently used.
Immediately Nose tells me I like the common notes of this scented triad: rose, jasmin, carnation, cinnamon, leather, ambery and animalic notes and therefore it proposes me to test five fragrances and rate them from -5 to 5.

﻿﻿
Fortunately the mind beats the machine and Nicolas thinks of adding one of my favourite leathers, Knize Ten to the test list chosen by the system among what's available in the shop. I blind smell the blotters again and again, pushing myself to give them unbiased ratings. Easy you'd say, but in a raw of "your cup of tea" kind of fragrances, trust me it's everything but simple to assign them ratings wide enough to shortlist them. Try it and you'll see.
Nose gives me another set of five fragrances and another again, collecting this way enough elements to try to forecast my tastes. Each new round will make the system fit more and more to my tastes but - after the third round we already likely have good chances to match the customer tastes - says smiling Silvio Levi.

The final suggestions, aside the storical viennese leather, are Floris Special No. 127 and Humiecki&Graef Blask. A foot in the past and the other in the future, that's me. My vanity marked by Castor and Pollux persuaded me to let my forearms be flooded. What a nice rediscovery Blask, smelled once at its launch a few years ago. The Floris was a surprise instead with bright citrus and herbs hiding through the elegant Belle Epoque-like powderness the ghost of Jicky.

Maybe that's because I deal with technology, but I think we're just at the beginning with scented applications. Who knows what will happen with the future devices: mobiles that can release different fragrances depending on who's calling and then, domotic prodigy, smart leds dimming colour and brightness of lights and fragrances in different parts of the house according to the situation. Also it will be possible to remotely control everything, even to get back home after a hard day at work to find a scented welcome thanks to internet of things, or better to internet of scented things.