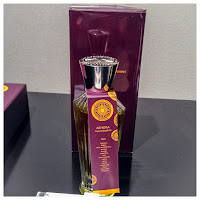 Neela Vermeire Creations
Neela Vermeire brings to Fragranze a lot of good news. First of all she joined the Kaon team that will distribute her line in Italy. Second the new stilish flacons designed by Pierre Dinand and far more handy, together with the new packaging. Last but not least the official launch of Ashoka, Duchaufour's forth creation dedicated to the legendary indian emperor who lived in 300 A. C. Like a wise monarch, Mysore sandalwood wears a bright crown with green notes of fig leaf and mimosa while covering itself up in osmanthus and iris sumptuousness. Its regal sillage bewitched me so soon I'll be back to you with more about it. 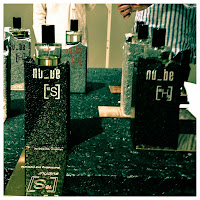 NU_BE
New fumes spring from the earth’s crust, everchanging substances like the creative imagination of NU_BE which entrusts again Antoine Lie with the task to shape [80Hg] Mercury and [16S] Sulphur. Unusual ozonic floral, Mercury is a shining fluid, nautical yet human with faded petals floating under its metallic surface. What charmed me more though is Sulphur, an aromatic and sulphureous modern chypre ending in a mineral velvet complete with a smoky animal kick. Emblematic of the diabolic dualism, masculine yet feminine, brutal yet so refined. 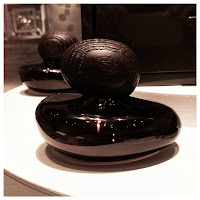 Majda Bekkali Sculptures Olfactives
Comforting and mysterious, Tendre est la nuit is the new olfactory sculpture Majda Bekkali dedicates to the beautiful and damned Zelda Fitzgerald. I couldn't resist but trying it on skin to enjoy its deep shades which seem to pull you down to the sinister yet familiar home's cellar looking for old dresses still drenched in smoke and perfume. Like hearing a longing voice coming from this long lost smelly memory, I look forward to sniff it again to dig more its complexity. 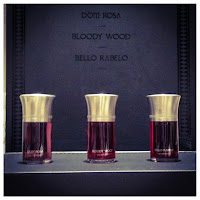 Liquides Imaginaires
Started at first as an artistic concept in 250ml flacons in limited edition, Liquides now will land in the shops in a more practical size. The new contemporary urns still feature on the satin metal caps the esoteric symbols Philippe di Méo wanted for the Eaux Sacrées. The Eaux Sanguines inspired by the dizzy reference to blood and wine will join the Liquides too. At first sniff the most thrilling one was Dom Rose, a spicy metallic and winey juice concocted by Sonia Constant. Fit for a second Dracula, vampire and gentleman.
Invia tramite emailPostalo sul blogCondividi su TwitterCondividi su FacebookCondividi su Pinterest