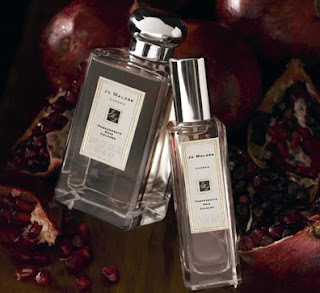 The legend tells that Jo Malone, british fragrance creator, started in the 80's from her parent's beauty treatments company more or less mixing essencial oils in her kitchen. Maybe this is the reason why even nowadays that the brand is a big reality part of Estee Lauder group and the fragrances are composed by famous perfumers like Bertrand Duchaufour (Lime Basil&Mandarine) or Christine Nagel (Wild Bluebell etc.), They still preserve a simple and thoughtless mood.
In 2005, right before leaving the company, Jo made a bold choice creating the only exception to the lightweight of the line, a cologne full of character that's far more than a sent bon, a complex juice that can't leave you cold: Pomegranate Noir.
The inspiration of the fragrance comes from a shiny dark red dress (bravo Memory of Scents and Gretel), something totally demanding attention. You can get it because of the strong contrasts it shows since the shining, slightly acid topnotes of raspberry, pomegranate, plum, rhubarb and watermelon. Later the heart warms up thanks to the spiciness of clove and pink pepper, rounded off by rose and jasmine. Finally the base is a gloomy bed of resins with olibanum, opoponax and labdanum supporting a rough woody base of patchouli, cedarwood and guaïac.
Bravo to all of you for having guessed the dark, slightly grim charm of the fragrance (crows, cats, barn owls) and the texture shining at first (velvet, glass) and ironic with red fruits (Take five, Capitain Harlock) and then rough and severe (woolen coats, dark tunics), to have made choices according to opposing sensations about places (Canada, Norvway, woods but also Londra) movies (Dead man, A single man) and a certain melancholy and introspection (deserted hotel, Un chien andalou, tzigane music, Murakami Haruki, Battiato). Last but not least ineluctable intellectuality and a pinch of cynicism for the dry base, almost bitter (Charlotte Rampling, Baudelaire, Caronte, Sherlock Holmes).
Here we go with your replies...

Florence
Gretel
This smells familiar to me even if I can't guess it but it's something I've already smelled. Also the notes are clear but at first I smell a mournful carnation wrapped up in incense and woods, then it makes me think to a black violet wrapped with a pall again with incense and wood... Anyway incense is there as for the woods. Let me say cedarwood just to name a dry wood... You'll have some big laughs Mags!
Mauro
The first impression is the one of a well balanced fragrance, an elegant mix of spices and green notes of black tea I suppose, a light floral facet in the heart taming down the warmth of the spices to fade into a slightly woody and smoky touch. It's a fragrance carrying me to London at beginning of the XIX century.
The important thing is on paper this fragrance is dominated by green fresh notes while on my skin is ruled by spices and a main slightly sweet note, let me say liquid and comforting, slightly indolic, maybe jasmine that evolves slowly leaving space to woody notes with a touch of vetiver. I believe it's marketed as a masculine scent, an amazing and refined creation from a decade ago. It comes to my mind Bulgari Black even if the floral note in the heart lends me to Dzing by Giacobetti for Artisan Parfumeur: ok the goal of the game is not to guess the fragrance and maybe I did it wrong, but my olfactory memory led me that way.
Memory of Scents
This ones opens with a very mysterious accord. It combines the cold, bitter camphor with warm, sweet clove. Although it is clearly medicinal it feels very familiar and comforting. Perfectly balanced. These top notes are angular and feel like polar opposites. Ice and fire. I have an intense vision of a red ball floating in the air, covered in a thick layer of resin. Moving to he heart there is a fruity sweetness. But the use of fruit is almost ironic here. It is not sweet or cheerful. It serves to give substance to angular, volatile top notes. The base has nuances of patchouli and incense. Overall if I had to use one word to explain this it would be "ceremonial". Not something for everyday use but extremely comforting. It has body and substance. Very tactile.
Salvatore
It's a fragrance I feel instantly fresh, pungent, even balsamic but there's also something alcoholic and fruity going on! There's also some patchouly for sure that gives that minty vibe but also reminds me of moist woods from trees in a forest!
<Blind Sniff Roulette #2> <Blind Sniff Roulette #3>

It was a wonderful experience! Thank you Ermano. In all fairness I have to admit that I immediately recognised this as it is one of my all time favourites. I knew the story about the red dress but I would never associate this with a feminine garment. I think it is one of the most masculines of the line. It is very interesting to see that the dark element is something that everybody recognised and this must be something quite surprising for anyone who knows the Jo Malone line. There is only one more release from Jo Malone that has the same deep, masculine vibe, 154, but I think it might be discontinued. To anyone reading this, stay tuned because Pomegranate Noir was the most main stream of the three.

Thank you for participating so nicely dear Memory of Scents!
I totally agree with your impressions about the juice and think you did an amazing review on your blog:

I never happened to smell the 154 and I think it's longely discontinued sadly. Maybe this was another odd one out of place. Fortunately they didn't discontinue Pomegranate Noir.