Take an evening at dinner with tonka beans 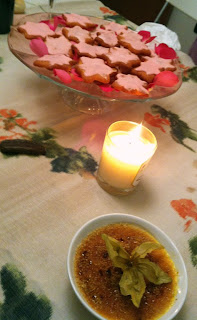 Take the coming holidays air with its gluttonies, take an aesthete affected by incurable perfumes mania that's also passionate about good food and cooking since ever, give him a handful of tonka beans and the trick is done.
Well, yes, another passion of mines since ever has always been cooking and the same curiosity in experimenting with fragrances leads me often also among the cookers to try particular matchings and new stimuli. By chance no other sense is close to olfactory sense as taste is: often even before tasting with the mouth and tongue, we taste with the nose the aroma of food before eating it and again once in the mouth, we smell it from inside. For example the precious truffle, you can taste it above all with your nose as it's enough to use a tin bit of it to give everything it touches its powerful aroma. Another example: have you ever guessed why with a cold you cannot taste foods? It's your closed nose fault and not for sure because of your taste buds. according to various reserces in fact it seems that 70-75% of what we call taste actually is given by inner olfactory sense, in other words by olfactory receptors in the inner nasal cavities close to the mouth. The remaining 25% is than completed by taste buds that are able to perceive only sweet, salty, bitter and sour. 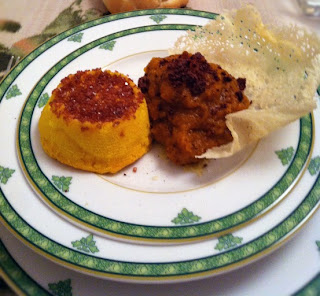 At this purpose I was amazed by preparing a dish playing with the impact of sweet and salty completed then by totally olfactory, tactile and visual sensations.
First of all the visual impact of bright colours, from cream to red, giving a warm sensation actually for a cold dish. Then the constrast between a saffron flan with red salt crystals from Hawaii cracking under the teeth, making your mouth watering with its gentle salty and almost nutty taste and a soft pumpkin mousse with candied facets from mostarda mantovana, with slight spices and the bittersweet touch of dark amaretto. Trust me, your perception of flavours is so disoriented from preconceptions with the contrast that you'll be able to notice facets you've never notices before, also concerning the aroma. Nevertheless, taste respect to smell is eased by complementary sensations. It's more difficult to suggest a sensation just with a trail of invisible smelling molecules rather than with food coupling tactile, visual, taste and olfactory dimensions, in fact i believe tasting food is one of the most complete sensorial experiences. So when someone is able to give us emotions just with light invisible floating molecules, chapeau!

You will say: "But what's the matter with tonka beans?". Once Ernest Beaux said ironically that he used to make a crème caramel with vanilla while Jacques Guerlain used to make Shalimar. Well, I can say that while Thierry Wasser makes Tonka Imperiale with tonka beans, I make a crème brulée. After long research, a dear friend of mines gave to me some tonka beans as a gift: if you have never seen them, they're amazing, rather ugly to see, they almost remember me dark olive seeds but they exude such a heavenly smell. Original from tropical south america, this pea-like tree called cumaru produces fruits with an incredible smell given by a high percentage of coumarin than in the natural bean smells terrific, vanillic but with green nutty hints, sweet, vaguely honeyed but also aromatic with blond tobacco spikes that took my mind back to the basenote of Guerlain Heritage. It's also very powerful, just think a small handful has literally flooded my kitchen's dresser.

Back to taste-olfactory suggestions, it's been enough to grate a few tonka bean instead of the classic vanilla in a crème brulée to give it an unbelievable taste. I also wanted to serve the whole with a spiced rose to tease the olfactory with less creamy tones so I served the cream with some honey bisquits with cinnamon and cloves, covered by a very fragrant rose icing. Again, surprisingly the floral facets were more perceivable eating the bisquits rather than simply smelling them; I also wondered how much sight polarizes us: while preparing it, the white icing sounded strange with a rose smell, instead when I tinged it in pink it looked so normal and even more, il seemed to smell even more floral. It's incredible how our eyes trick us while our nose tells always the truth.
Invia tramite emailPostalo sul blogCondividi su TwitterCondividi su FacebookCondividi su Pinterest