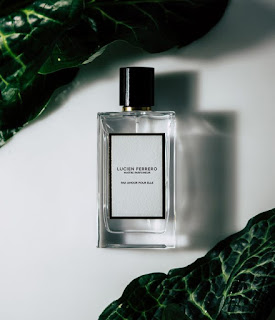 One of the most exciting debuts during the last edition of Esxence – The scent of excellence was Lucien Ferrero with his eponymous line which I first reviewed for Çafleurebon and now share here. Unfortunately during the show I missed Monsieur Ferrero, but I was introduced to his beautiful works by his distributor Roberto Drago, who established two years ago Per Fumum Torino, an amazing cultural event about perfume and olfactory culture.
It’s down there in Turin that I got to meet Lucien Ferrero as we both were lecturing for the Osmothèque Versailles about different historic topics: first his conference about Chypres, then it was my turn to talk about “The golden age of Italian perfumery”. Meanwhile we had some time to talk about his creations. For who’s not familiar with his name,  Lucien Ferrero spent many years in Grasse with perfumers like Jean-Claude Ellena, and Jean-Claude Gigodot and  signed over 50.000 formulas for Expressions Parfumées,  some of which were produced and the others are part of the company’s library. 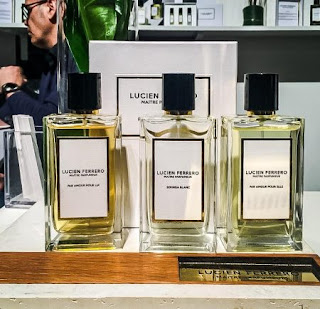 “After couple of years I left Expressions Parfumées, Roberto convinced me to get back to the lab and compose for myself. After almost 40 years I was tired of creating with many constraints, budget, marketing etc. I still had so many unexpressed ideas that when Roberto gave me carte blanche, I couldn’t be more happy” said Lucien Ferrero.
“Lucien was so happy he told me he’s got like fortysomething formulas in his drawer so to keep him quite I told him let’s start with three!” added Roberto Drago, who’s also the founder of Laboratorio Olfattivo for which Lucien Ferrero signed two new creations in the Masters Collection. This cannot make me happier given the result is a trio of beautiful perfumes expressing timeless French refinement with a pinch of up-to-date sparkle. All the three creations were extraordinary, but I chose to review Par Amour pour Elle, a fragrance Lucien Ferrero created for his wife. Trust me, I was lucky enough to smell it on this elegant lady and was totally smitten.

Described as a love hymn to women, Lucien Ferrero Par Amour pour Elle is an amazing green floral unexpectedly opening with the crispness of neroli and dewy hyacinth boosted by the sulphurous juiciness of blackcurrant buds that renders the uber-chic bittersweet trail worth of Guy Bourdin’s early Queens blushed by Heidi Morawetz. The blooming heart is precious, but never pretentious and the opulent white florals keep away from prosaic fruits and cream, balanced by the powdery piquancy of dianthus and tuberose’s poisonous greenness.

This bouquet echoes the leathery flesh of Casablanca lilies and you swear you smelled this golden girl in another life in the late 1970s sharing the dry champagne glamour of predecessors like Jean-Claude Ellena’s Van Cleef & Arpels First and the Jean-Louis Scherrer fragrant debut by IFF perfumer Josette Ramisse. She’s classy as ever and modern thanks to a mysterious balmy sandalwood sweeping away the mustiness and the aldehydes hairdos and lending a more androgynous oriental vibe that makes it wearable also by adventurous guys. She’s not the average wishi-washy girl looking for comfort gourmands and approval, she’s the independent woman you won’t forget. It’s Dalida dressed in a Scherrer silver sequins gown, singing and dancing the best of the French disco-hits in her Italian accent, but remixed by Cerrone to an electro-house hit filling the dance floors. And the boys echo “Laissez moi créer”, ops, danser I mean…