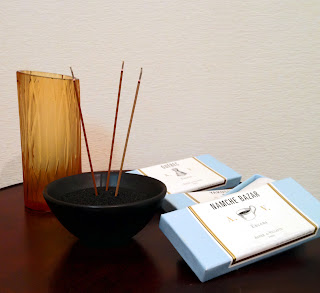 What's the smell of your summer nights? By the sea, in the countryside or at the mountain, lucky who's enjoying the nature and the perfumes it releases at evening. A few weeks ago I was enjoying the sardinian intense and wild perfumes myself but I'm already back in town and will spend most of the month here. Inevitable to be won by cravings for open spaces smells at home making your mind fly away looking for some chill. While I like burning candles during the winter, in summer I prefer incense as I find it perfect to clean the air coming from open windows. Therefore these evenings I'm burning some Astier de Villatte japanese incense sticks I bought in my last parisian trip. They write in the air per fumum such striking stories of faraway countries I couldn't help but sharing them with you.

﻿
Coming from China in 538 CE together with buddhism, incense or Kō as they call it, has become such a big part of the japanese culture to the point it's used not only to scent rooms or in rituals and ceremonies, from tea ceremony to funerals, but it has developed a proper ceremony itself, the Kōdō (the way of incense). In the VII century on the Awaji island they already pruduced incense using agarwood and even the most confidential Makura no Sōshi (The pillow book) pages are scattered with references to incense. Unlike the western countries where it is kept for altars, in Japan burning essences becomes a more and more refined pleasure for which incense boxes and burners are created together with other tools that are small jewels to be shown for the joy of sight along with the joy of smell.

Japanese incese is made mixing oils, herbs, woods and resins among which sandalwood, agarwood, patchouli and benzoin. The mixture is worked and drawn in sticks that become solid once dried. Unlike indian agarbatti featuring a wooden stick, it has a less smoky, more refined smell while burning and doesn't change much the scents. Astier de Villatte incenses are made by the Kō-shis, japanese incense masters in Awaji. The 125 sticks pack has a good quality-price ratio and the fragrances are the same the Tagasako team led by Françoise Caron made also for some candles.

The ones I'm burning are Yakushima, Quebec and Namche Bazar and it's noteworthy the likelyhood with the scent from the candles. You can even play like I do in a less stately way, playing the typical Kōdō games: smell the incence sticks, compare them and try to guess the notes. Then you chose one and light it. Brief and feel its smell filling the air: how many facets appear!
Yakushima renders the landscape of the homonymous island with a beautiful cedarwood accord, rounded by a fir balsam drop and the greeness of moist foliage. Quebec instead is softer with a fermented, slightly toasted green accord warmed by th vanillic sweetness of sweetgrass, a herb used by native americans as a medicine or to keep evil spirits away. My favourite though is Namche Bazar which combines the dry smell of black tea with its hay and tobacco hints to the aromatic brightness of spike lavender and verbena. The contrast is so uplifting in the air that gives me a peaceful sensation. I like to burn it before going to bed, smell it through the heat like an invisible pillow talk, surrender and find again its ghost with the fresh morning air.