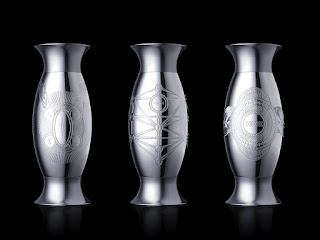 Few time ago, after five years missing from Paris, I had the chance to get over there for my work and I've been able to take the time for a small tour downtown, aside for a nice tea chez Mariage Frères, also to hunt for curiosities and new scented stimuli. Of course the priority went to the most exclusive and desired objects, the fragrances you can only find at the Ville Lumière and nowhere else in the world. Charmed by the review Octavian Coifan made out of them, for the first stop I went straight to L'Eclaireur, a storical concept store in the Marais, to smell the recently launched Les Liquides Imaginaires that were showing off solemnly in the window with their Amphorae "Reliquiae".

Les Liquides Imaginaires comes from the visionary creativeness of Philippe di Méo, successful marseillaise designer that collaborated in the past with the biggest luxury brands in many fields, from Baccarat to Dior, from CocaCola to Möet et Chandon passing by Christofle and Guerlain. This is a limited edition available in a 250ml unique size. Limited edition also for the wonderful Amphorae with a huge esoteric hand-made decoration featuring various religious symbols going from christianity to hebraic cabala, from islamism to paganism. The same obscure symbology is enclosed in the monogram used as logo of the project. Even the way the three fragrances are presented is austere and ritual: no pyramids, just a brief description is given while the three smells are let free to exhale from the open Amphorae. About the inspiration of these waters Di Méo says:

"I've thought that if a scent could fix forever a precious memory, an intimate pleasure, a sacred ritual, then it could also play with shadow and light, be the poison and the antidote. Loaded with a powerful imagery, it could be able to illuminate, decorate, reinvent, bewitch and evidently trouble.
Therefore I imagined these smels like memories laying on the water, as one could lay his memories, his obsessions, his confessions, his loves on the sheet of water to look at them from a higher distance".

The scents with a latin name, Sancti, Fortis and Tumultu, represent three different interpretations of the incense theme, brought to a sacred dimension but disconnected from particular religions and countries like it happens for many fragrances from Etro's Messe de Minuit to the Comme des Garçons Incense Serie. Here there's a visceral and potent sacredness calling that native sense for Divineness with who to get in contact through ritual gestures to find themselves again. The waters with different colours, develop staining the incense accord each time with different olfactory textures and palette with a vibrant and ipnotic result with such intensity comparable only to some Nasomatto juices. Nevertheless the tone is completely different here and where the Nasomatto are a hoarse liberating shout, these liquids sing in unison a hymn with round imposing voice, flawless and so rich in harmonics lacking in the first ones. Lasting power is amazing: I got back to Italy with three bandages soaked with the fragrances and wrapped in paper envelops and after more than a week they're still well detectable. Also on skin where the liquids melt unfolding all the notes with good sillage, the result is surprising.

Sancti, angelic relic, clear beneficial water that purifies the mind and brightens the spirit. Probably it's the most canonical harmony based on incense of the triptyc yet it keeps far from being trivially clerical and attempts a crystal clear light. The opening is pungent and ethereal, cold as morning breeze with notes of juniper and petitgrain (and maybe a touch of gelid mineral aldehydes) opening up your nostrils and getting space for the full bodied incence resinoid, bright as a beam. Light embraces the serene shadow of cypress in the woody and balsamic base, just warmed by a light moss that gives it soundness.

Fortis, black water that burns the bad memories, the abyss where one can leave the past to rebirth from the ashes like a phenix. It's the most evocative perfume and the one with the less evident incense note playing as a solid silent brazier on which pepper, cumin and other spices flare up in the opening emphasized by the herbaceous animal warmth of a pinch of oud. Moreover on skin it blooms in a lofty way with a prominent dry and mellow heart of virginian cedarwood made earthier by a hint of vetiver. The drydown melts into the mature hay-like aromatic sweetness of tonka bean with a milky whiff of Mysore sandalwood so soft and winning I couldn't take off my nose from the wristle, that's almost to die for.

Tumultu, turbid fluid, perfume of abandon, gauzy exhalation in a sweet water inviting to nudity. The softest fragrance of the trilogy heralded by the opaline colour, spreads itself on skin starting with the fresh and spicy sharpness of star anise shining on the sidereal incense. Later it gets warmer and warmer till it melts into the Mysore sandalwood tender as baby's flesh, supported by an intimate accord, almost an alcove aura made of musks and balsams playing across virginal innocence and yearning desire.