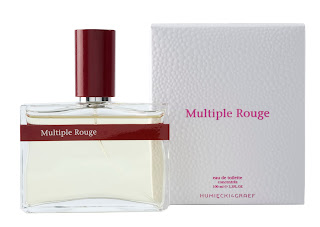 Chosing the last fragrances for the Blind Sniff Roulette wasn't an easy task: as you already guessed, the thread of this year's edition were the fruity notes both in Pomegranate Noire and in DK Unleaded, but I was looking for something avantgarde, unconventionally fruity. What a better occasion to talk about the creative duo behind this line of "emotional perfumery" with a personal unmistakable style speaking in a future language? Of course I'm talking about Humiecki&Graef and their psychedelic Multiple Rouge. Created by the brand in-house perfumer Christophe Laudamiel, it is a fragrance inspired by euphoria, eccentricity and fun. Almost like being in a big labyrinth-discotheque, lively fruity notes chase each other fast, wood strawberries, frozen orange, peach and ananas surrounded by sparkling spices (coriander, cinnamon and cilantro) and wrapped up by a glossy fluorescent bubble of floral-ozonic notes over a violet leaves and immortelle base. Bravo! You nailed the mood from one hand for the euphoric and thoughtless aspect (Warm colours or white, tropical places and music like bossa nova, lively animanls like gazelles, toucans and hummingbirds, linen shirts and pants, movies like Paradise and The blue lagoon, Josephine Baker) and for the other hand for the psychedelic, astonishing and futurist aspect (quicksilver colour, animals like worms and snails, surreal places like the rain forest, obsessive percussions, movies like Enter the void and Clockwork orange, Wilbur Larch). Finally let me thank all of you for having participated so passionately, and here are your replies!
Florence
First of all I must say even if I don't pick the notes, I like this perfume and I feel better wearing this rather than wearing Pomegranate Noir, it matches my tastes and I find it sweet and original at the same time, I'd be happy to wear it. It's a pastel shade, almost suited for fall or springtime. It seems classic somehow but it isn't close to anything else.
Gretel
Ananas, fruit salad made of citrus and rotten fruits, with an effervescent aspirin in the topnotes of this aroma that seems more of a chemical note rather than a finished concoction. Maybe there are also carnation and vanilla or banana (I always smell them the same way) but this aspirin note keeps going on and on on my arm. There's also a fatty basenote like motor oil and drops of gasoline mixed with yogurt, an extraterrestrial smell brrrr!
Mauro
A very floral scent smelling of fresh white flowers, hyacinth, gardenia, lily of the valley, ylang-ylang, and ends up with a gentle, slightly animal musky touch. Maybe it's a perfume created for a young girl coming out of her teenage to become a woman. Feminine fragrance, it's light, sheer and playful like a teenager acting as an experienced woman yet it still has all the uncertanty and weakness of youth.
To be honest, this scent doesnt really appeal to me, it seems more of a mix of odors without a thread put together by chance; I can't say it's a bad perfume but it doesn't speak to me... I feel it very "commercial" and uninspired.

Memory of Scents
Now this is a challenging one. It is a huge sappy green blast. It smells like the yellow centre of a daisy. About a million of them. Put in the blender. With two truckloads of dead leaves. And I cannot exclude the possibility of a few small dead animals thrown in together. There is a sickening sweetness also in there. What is strange is as it progresses to the drydown the herbal, green, sweet vibe collapses and instead a more technical, inky note becomes evident. There is also a hint of the egg white note that makes Secretions Magnifiques magnificently repulsive. Although none of the notes that I describe are repulsive to me, this is one of the biggest stinkers I have ever tried. It is a "get this thing off of me" kind of stinker. This is as avant garde as avant garde gets. If my memory serves me well, I have smelled this once and it is Byredo M/ink. Can I go wash now?
Salvatore
The scent immediately evokes happiness, freshness and joy of living: tropical fruits and refreshing drinks on a sunny beach!

I have to smell this again, although I do not dare to. I was coming out of a bad flu when I tried this and I cannot say I enjoyed it. Of course everybody smelled flowers, I smelled only the pollen, so it must be me who is wrong. Out of curiosity has anyone from the fellow blind sniffers smelled M/Mink? Do you see any similarities?

I simply loved this post. Some comments are soooo intense. Perfume can bring so many different sensations, memories, moods...extremely creative!!!

Yasu dear friend,
For what I know Gretel smelled M/Mink because we smelled it together time ago. M/Mink if my memory serves, doesn't have fruity notes nor much florals at all. It was all about glowing plastic woods and a spicy touch. So maybe the plastic halo and the spices are the common part you smelled. The only similarity I smell here is with the floral ozonic part of ELDO Secretions Magnifiques but put here in a good way and not in the provocative, let's say protozoic context of SM. Let me know if this can make sense to you :)

Dear Simone,
so nice to see you here again!
Indeed it's amazing how perfume can speak to everyone with a universal language suggesting so many sensation, isn't it? :)

I went back and re-tested this now that I have fully recovered from my over-sensitizing flu. I got a little bit more of the fruity vibe, a little bit less of the raw green. But the sulphuric assault of the Secretions Magnifiques heart note was still the strongest element in this. I cannot identify the cheerful aspect in this. This is a definite scrubber for me. Still, an amazing experience Mag!