Esxence 9: fragrant temptations from the Garden of Eden 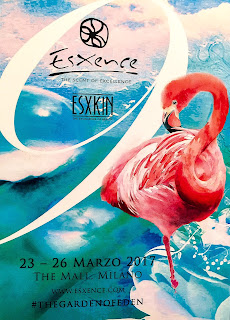 Nine is a revealing number closing the loop of the single digit to let the reincarnation to a a higher potential cycle.
La Gardenia nell'Occhiello has attended many editions of Esxence - The Scent of Excellence as a web friend and this year on March 23rd-26th I'm looking forward to share with you here and through Facebook, Instagram and Twitter insights on the people and the exciting news the invisible art of perfume will show us.
The ingredients announced to the public during a press conference at the Principe di Savoia Hotel, one of the oldest Luxury 5 star hotels in Milan, really look promising.

Maurizio Cavezzali remarked how steadily Esxence has grown over  the past nine years, noting when it began it was considered a block fair (only 3% of the brands exhibiting were from foreign countries) and now 72% of the Houses (more than 200!) hail from 16 different countries including EU, USA, Middle East and Far East. Milan has the Fashion Week, the Design Week and, since there are more and more OFF events also, it's going to consolidate the Perfume Week, thanks to Esxence. 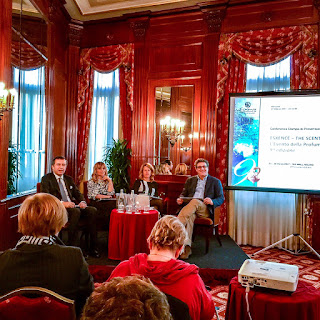 Compared to the global beauty market Niche perfumery is still a small yet steadily growing market attracting more and more the big Goliath companies as remarked Silvio Levi. In the end, David is still alive and trying to deal with the Giant. He also pointed out that  brands can benefit from the connection with packaging suppliers that Esxence is also trying to establish so, if the niche of the past was good but ugly, the niche of the future will be good and beautiful.

Elisa Duò is the Art Director that curated this year's theme: The Garden of Eden. She remarked that 9 is a magic number, it's 3×3 symbolizing the number of sky and yet the number of creative force (9 months to make a baby). This made her think of perfume as light, something able to sculpt our state of mind, sweeping us to a paradise, that magic Eden where our memories are reborn. The Mall will become a Garden of Eden and like the mythical garden, it'll have its guardians: the pink flamingos (like the ones you can see in Villa Invernizzi) that symbolize the ephemeral yet elegant tenderness of perfume.

Valentina Cagnola from Equipe International showed highlights of the calendar of events, featuring discussions and conferences with the Osmothèque Versailles, Michael Edwards and the workshops with Mouillettes & Co.  There can't be The Garden of Eden without Adam showing the naked truth: special guest of this edition is L'Enfant Terrible de la Parfumerie Christophe Laudamiel who will introduce together with the bad girls Sarah Colton and Karen Marin (Givenchy Parfums Business Development Manager) his Fragrance Manifesto to the attendees. In addition, the finalists of the Art and Olfaction Awards will be announced as usual. There will be a special olfactory workshop for children, a pilot project that will be proposed to the schools.

The Eden of course will be populated with fragrant temptations starting with the long awaited tobacco themed serpent-perfume Naja from the always remarkable Vero Kern who celebrates ten years of Vero.Profumo. There's a big buzz also about perfumer Luca Maffei launching 12 creations for several brands like Jacques Fath (Rosso epicureo, L'orée du bois, Les Frivolitées, Lilas Exquis) e Jul et Mad (Bella Donna). For what I remember it's quite a record in a perfume fair as even the prolific Bertrand Duchaufour happened to launch like 7-8 fragrances at the same time. Keeping fingers crossed for the Art of Perfumery and for all the brands that will land soon to Milan.
I look forward to meeting you in a couple of weeks, for sniffing together or just to say hi!
Invia tramite emailPostalo sul blogCondividi su TwitterCondividi su FacebookCondividi su Pinterest