﻿Among the various stands at Pitti Fragranze, in the Spring section dedicated to new brands there was one that claimed attention above all for the essential display: ODIN, concept store based in the east-end of New York, which name is inspired by Odin, god of victory and knowledge of the nordic mythology, launches a line of four fragrances inspired by travels following myths and legends.

The most eye-catching thing at first glance is the lean and practical packaging like the american style chic loves: black boxes, physical, tall and with writings on the spine, almost like limited edition books. Black on black, smooth on rough, glossy on matt: this is the way the story of these novels is written, and the light that pierces through the four bottles let you see the ambery texture of the ink of these novels speaking french and dressing yankee.

I confess that when I hear the word perfume and american together, I'm kind of biased against it: in my mind something conjures up maniacally clean stuff like soap powder, or strongly synthetic and cloying like jelly beans, or even worse something unbalanced passed off as a fresh, modern wonder of perfumery. Fortunately I'm curious like a cat and ravished by the charm of the container I quickly go discovering the content.

Even if none can be considered a masterpiece, starting from the packaging the four fragrances exude proportion and sobriety showing off character and lasting power on skin without shouting. Surprisingly they do the job with a french taste reminescent of the classic european perfumery style and with high quality raw materials. Among the four juices, Owari and Century shine in oddity offering an evolution full of olfactory sensations.

01 NOMAD: a bergamot opening, supported by a cedar-heliotrope accord like a warm earl grey tea with honey, develops towards the powdery note of palmarosa with a whiff of pepper. In the end the main theme of the fragrance is revealed: a creamy sandalwood, a freshly baked bisquit with a spicy touch that later takes an animal musky pinch. All is about a milky and bisquity asmosphere like the smell of a good home-baked breakfast rather than the smell of a journey on the spice road following the caravans. Spices are there, but quite faint with a prevalent creamy heliotrope sensation (lacking any almond facet actually) together with tonka and sandalwood. Only the animal hint of musk in the base takes the immagination back to the nomads pass. 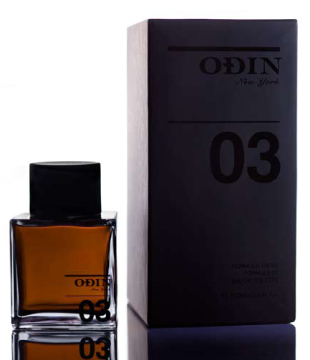 02 OWARI: it's an interesting citrus, above all for who like me doesn't love citrus scents. Owari is an hesperidic juice starting with a fruity-green top, not at all harsh, as you'd rub in your hands a fresh mandarin with its oily peel and the green leaf-buds. The heart warms up with spices and the citrus gets drier, less pulpy yet still green, empowered by a beautiful floral note of neroly never biting, that lasts for hours. The accord doesn't drift in an easily appealing flowery theme tough and warms up with soft woods giving a pleasant bitter orange impression. The base gets then back to a sweeter powdery woods bed with a warm animal touch.

03 CENTURY: it is the most complex of the four scents, the less direct and if it wouldn't be such a pleaser for the bright sweetness of the heart, it could even pass unnoticed. Even though ODIN describes it as a modern chypre inspired by cypress tree, if you expect it to be a chypre you probably will be disappointed at once trying it. Instead it's a good ambery scent that starts with a slightly green opening of cypress and peat gently warmed by the fall sun. Then it quickly evolves into an enveloping myrrh embrace dominated by facets redolent of almonds and dark honey. This is the most captivating and longlasting phase of the fragrance that tames down after some hours revealing an ambery  base veined by a musky-mossy whiff that adds a velvety mysterious ink-like touch.

04 PETRANA: the inspiration, taken by the ancient town of Petra in the Kingdom of Jordan becomes here a violet blooming through green leaves and fairly sharp and herbaceous facets, with light spices and powdery iris on a suedeish base. Even though the violet-iris-suede theme is nothing new under the sun, the fragrance is classy, soft and balanced but the only evident link to the ancient jordanian town seems to be the spicy powderness faintly alluding to the millenary dusty stones.
Invia tramite emailPostalo sul blogCondividi su TwitterCondividi su FacebookCondividi su Pinterest

I just finished reading your wonderful reviews. Each sounds interesting in its own way; Century sounds particularly intriguing. What you wrote about Nomad literally made my mouth water!

Normally I can take or leave the packaging of a fragrance (gimme the juice!) but in this case I must agree that it's quite eye-catching and handsome.