Djedi, the dust of centuries

"He can smite off the head of a living creature and restore it again; he can make a lion follow him; and he knows the secrets of the habitation of the god Thoth"

﻿According to Roja Dove it's "the driest perfume of all time" while according to Luca Turin is a "tremendous animalic vetiver". For sure Djedi is not the driest perfume I've ever smelled but the most intimately gloomy, austere and mystical one. There's a sacred aura in this fragrance that claims attention and since the first hesperidic and more solemn green (artemisia?) notes it's clear that joy is not a word of its language. From the top notes, closing my eyes I can see blades of light coming from the few holes of an imposing architecture and cutting the hollow darkness where you can't perceive anything, just through these blades you can glimpse the dust of centuries floating. You can't see things around, you can just feel the humidity rising from the pavement along your legs. Around it's only enveloping darkness and it's like it would hug you tight leaning his chest on your back he'd make you feel his deep and heavy breath. This creature, having millenary wisdom beyond good and evil, wants to gift it to you, an obscure, bitter gift, which huge treasure is loneliness and introspection.
It's a trip to hell of a new Orpheus, forgetful of love and hopes, an Orpheus whos Eurydice is damned forever and whos descent will lead to a cosmic resignation, a tearless cry, almost feeling compassion and regret for who doesn't have this burden.
﻿﻿
﻿ 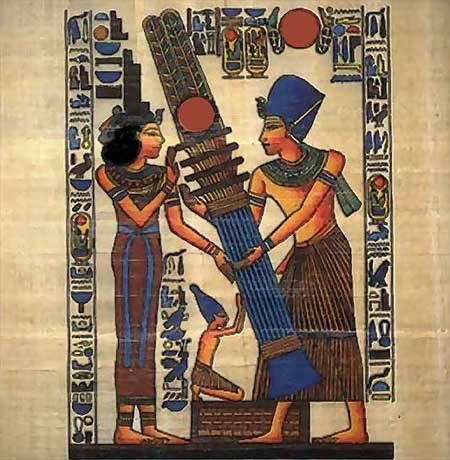 ﻿ ﻿﻿ As mentioned in the initial quote from the Westcar Papyrus, Djedi was a priest, healer and magician having wisdom and even the power to take back to life the deads. It's said that Jacques Guerlain started composing this gem many years before, even during the first years of  XX century but it was launched only in 1926 with the name of Djedi probably inspired by the imposing discovery by Howard Carter of the tomb of Tutankamon in 1923 and linked with the esoteric aura in fashion in Paris at that time. Unfortunately there's no trace of the original 1926 scent if not for the few lucky people that nowadays will anyway just enjoy the beautiful bottle designed by Georges Chevalier for Baccarat with its art decò refined lines slightly reminescent a golden aegyptian sarcophagus with its lid open. It has been sold just for few years and I bet that, even if it's an extremely elegant perfume, it has been around for few years and then discontinuated because it was too avant-garde for that era. Djedi with its angular, cold and unmoved vetiver shows how Guerlain was a century ahead of the taste of his contemporaries anticipating tendencies that would have arrived only nowadays in perfumery. To know how the original Djedi was we don't have other chances that trusting on the rendition that the House of Guerlain did in 1996 to celebrate seventy years since its launch, in a numbered limited edition of a thousand Baccarat crystal bottles similar to the ones guesting the Jicky parfum. I've been so lucky to smell it on my skin thanks to the courtesy of a passionate friend.
﻿
The heart of the perfume is dominated by an uncompromising, disturbing vetiver made even more brutal and magnetic by natural civet, less fecal than the synthetic one used nowadays and more vibrant of spicy tones. Even if the pyramid states it has damask rose, sniffing it you can't detect the minimum amount of it at the end of all that prevailing shady humanity. It's likely to think that a humid musty rose could be used here in minimum amounts to give thickness and even more depth to the underground.
The base becomes more powdery and soft with iris root and a whiff of musk but it's not enough to warm up the heart of this icy cold creature and its immediately balanced by inky oakmoss and a musty patchouli and by birch tar with resinous tones keeping it back to the darkness.
As many say, I recall all the matching points with Vero Kern's Onda parfum that also springs out of an animalic vetiver but where Djedi is solemn shade and lonelyness, Onda is temper, vital force and warm sensuality given by a huge amount of honey and above all beeswax.
Invia tramite emailPostalo sul blogCondividi su TwitterCondividi su FacebookCondividi su Pinterest