﻿﻿
﻿I always liked Andy Tauer for the enthusiasm that also in his blog he admits to put in playing like Harry Potter with scents in his kitchen. I can imagine him with his small glasses while trying to make some food recipes with contaminations from the world of perfumery like dishes with jasmin flowers and viceversa contaminating perfumes with raw materials taken from the kitchen, for example spices like cinnamon.
The result is sometimes surprising because it leads to something totally unexpected and not banally edible. The good thing is that these trials at the beginning start as pure creative verve without any rule, hence without marketability constraints. On the other side there's a difficult large scale production due to very expensive raw materials and sometimes hard to find in large amounts. This is the case of a wonderful experiment made in 2006 that later Andy produced for a very short period in a limited amount of pieces: Orris is the name of this trial and you can consider yourself lucky having at least a tiny bit of it like me.

I guess the choice of the name Orris instead of Iris hasn't been made by chance but wanted to immediately suggest in mind the idea of the orris root and not the flower. Orris is one of the most particular and atypical iris interpretation (which root only is used in perfumery), similar to no other one because it emphasize the aroma of the root to its wildest and earthy state without morphing it into the ethereal and powdery idea of a powdered sheer flower. 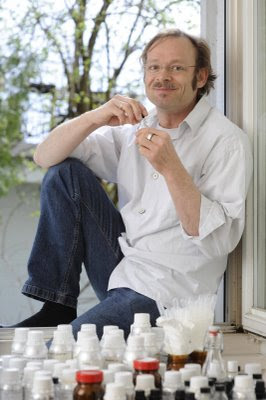 Unusually for an iris perfume, the opening is powerful and citrussy with an unripe lemon, greener and tart, made sparkling with a stinging blow of pepper joined by cinnamon to warm it up. From this blast springs out the ethereal iris powder with a vague rosy impression of geraniol chilled down by the coolness of violets that bring back for a while the greeness of the first whiffs. Then slowly rises the bulgarian rose with boozy facets of damascenone that melt the trail of cinnamon in a soft yet hang liqueur.
A few at a time appear the precious woods, australian sandalwood drier and more pungent and Mysore sandalwood with more velvety facets, almost floral. The woody aspect is emphasized now and becomes full-bodied with hints of oud and vetiver shifting back the composition on green tones but conferring also a smoky facet. The heart of the fragrance at this point is impressive and almost recalling a smoking cup of darjeeling tea with drops of rose honey that makes me literally weak, I must drink it.
Smoke then, gets more subtle and colder with pinches of indian incense re-opening the road to floral notes of rose and orris root becoming more powerful and buttery, underlined now by a wonderful accord of ambergris and birch tar taking the unmistakable resionous and leathery warm signature at the base of first Andy's compositions, L'air du desert maroccain and Lonestar memories. The precious root is anyway always there through the smoke, fairy powder among the resins, imposing invisible architecture with its breath blowing on bunches or wooden roses.

The effect is dramatic, magnetic, like never an iris has been before and I've got the suspect it's addictive since I couldn't stop sniffing my wristle. What a pity indeed Andy doesn't make it anymore for the high cost and quality of raw materials (that you can neatly prerceive) and the tricky production of the particular iris butter used. After all, since I have still few drops left and since wishing on a star doesn't cost a thing, let me try it and who knows...
Invia tramite emailPostalo sul blogCondividi su TwitterCondividi su FacebookCondividi su Pinterest