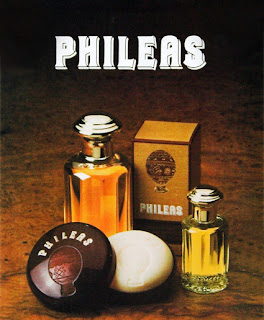 For the second round I've chosen to make you travel, at least with the fantasy like Jules Verne with his tales. In fact just to the adventurous "Around the world in eighty days" and to its main character Phileas Fogg is inspired  the fragrance of the mystery vial #2.
In 1984 the Maison Nina Ricci takes inspiration from the boldness and class of this character to create Phileas, a very green and leathery masculine chypre, sadly discontinued which can be the gentleman brother, but not less daring, of Caron Yatagan. In fact they share the dense erbaceous notes someone associates with celery (bravo Woody Freak) here anyway made more brilliant by an opening decidedly citrussy coupled with a leathery base instead of the animalic one in Yatagan. The one you smelled is the original formulation.
The legend sais Francis Camail (Aliage, Ivoire, Giorgio, Eau d'Hadrien) that concocted the fragrance arranged together a variety of ingredients from different continents to obtain a kind of round-the-world voyage out of it : from Europe (cypress, cistus, celery from Provence, Balkan oakmoss, Italian lemon) to Africa (Reunion vetiver, basil from Comoros, Moroccan wormwood, Kenyan marigold, jasmine from Egypt) till Asia (Chinese cinnamon tree leaves, Indian sandalwood, patchouli from Indonesia) and finally America (curly mint, Caribbean limette, Virginia cedarwood).
The pyramid instead gives topnotes of aldehydes, basil, bergamot, green notes, juniper berries and lemon. Heartnotes feature carnation, cedarwood, cinnamon, jasmin, caraway, patchouli, pine needles, thyme and vetiver while the basenotes are amber, labdanum, leather, musk, oakmoss, olibanum and tobacco.
Speaking of notes most of you felt the citrus ones (bergamot) and green herbal ones (lavender, artemisia, mint and pine/eucaliptus) from which you got the grey to cold green range of colours. Someone got also the spicy edge besides the clamorous smoky resins and indian sandalwood base. Bravo also Saraprfms that smelled the floral hints that probably where the sell up in your face. Strange nobody got the leather this time. Maybe from this comes the impression of an elegant side opposit to a mysterious side, primordial like Marcopietro says under a civilized skin. Let's note that almost everybody had a deja-sentì vibe or it sounded familiar at least. That's for sure given by the fact that during the mid-seventies and for all the next decade this kind of fragrances were very popular and adding here and there different shades, many play the same chords. Therefore with Yatagan and Phileas other titled lounches came as Punjab by Capucci and Monsieur Carven and many other variations on the same theme. Speaking of the around the world trip it's curious you associated the scent to personalities in "exotic" places (Casablanca, Fitzcarraldo's Amazone rainforest). But now your answers...

Just put on the skin it doesn't give a familiar sensation but it's a deja-vu. A classic perfumery aroma, a nice fougère in Houbigant style. A first-rate fresh accord with bergamot and lavender that keeps going on for longtime. Projection is good, the aroma in not eccentric but it has a strong temper, not for the tame. During the evolution appears a creamier note, maybe amber or sandalwood, with gentle spices but staying on the nicely fresh side. Staying power is good. A top-quality product for people looking for tradition and a bit of humor. I like it.
Marzipan
I'm worried I'm a little bit short of arguments for the number 2. At the beginning it made me think to a big perfume from the sixties, maybe a vintage. At second sniff I was puzzled, it's a strange chypre, a strange woody note under the pushy greeness.

Obscure and undefinible perfume for me, I can try to describe it but I know well I'm moving into an unknown land to me (Mags forgive me for what you're going to read,  huh? ) So, this is a masculine scent, like the previous it starts with a strong citrus component - lemon, cedar - that after a while of quite brightness gives space to balsamic green notes, floral notes, maybe it has lavender, woody notes - sandalwood - … and smoky notes… ( it recalls in my mind the smell of eucaliptus, maybe due to the several fumigations I was forced to take when I was a child), making it a cold and proud composition.
This is not a perfume born in these last years, but on the skin it reminded me precise references: it's the smell of fog, that heavy air, milky and muffled you can breath in the morning walking along the river, almost walking in the space, it's the scent of fresh washed clothes let dry out in the humid cold days.

Tamberlick
Things are not easy at all with vial #2. To me it's a "fougère" quite bitter that gives me a strong "known" vibe: I know it and I can't get it now, or it's a fragrance very representative of a family. It has a dard green soapy opening reminescent of Iris Bleu Gris by Maître Parfumeur et Gantier, but evolving in a still green aromatic heart where I think I smell mint. It ends with a dry base that could be sandalwood.

I must say I like it very much. It's pure elegance.

Beautiful juice that really made it difficult to play. What's that?

With the first one at a certain point I had doubts as I thought it could be a feminine scent even if I didn't write it, I thought it was self suggestion due to the fact it reminded me Diorella in some aspects. With this one I have no doubts. This is really a masculine one. Another vintage in my opinion.
It's reminescent of old after shaves, I immediately thought to a barbershop, for this reason it could be a classic english scent. Incense, lavender? Here it goes the celery smell! But let's go!