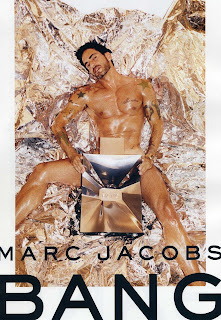 That Bernard Arnault has always had his pets is not a mystery, we've seen it also chez Dior where he allowed since the beginning to John Galliano to lay down the law imposing an iconoclastic imagine in a house epithome of the french "bon chic" style in the world.
But enfants terrible grow and now the new in-house favourite at LVMH seems really to be him, Mark Jacobs, stylistic director for Louis Vuitton and for his own young brand. Even if the maison Vuitton never released a fragrance, it seems that like in the niche side Kilian Hennessy has had carte blanche, I have the impression that on the commercial side the same happened to Jacobs that already developed some feminine fragrances for his brand (Daisy, Lola etc...) and finally also the first masculine fragrance.
You can see that's him the new "top of the class" in the commercial section by entering in any Sephora (also owned by LVMH) where usually his line is guested in a dedicated display like for Serge Lutels or other particular lines. You can see it also by this last masculine lauch in which they put for once a special care in creating something out of the usual crowd.
Bang! The shot of a gun, a sudden hit, something strong, but also a no-string sexual reference, not by chance the ad features the handsome Mark just waxed, tanned, combed after a workout at the gym and a greasy final touch ironically covering his crotch with a huge bottle of fragrance. 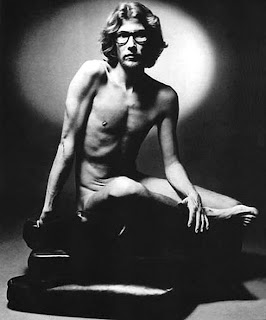 How not to compare it at once with the more than cerebral Yves Saint Laurent portrayed by Jeanloup Sieff in 1971 (concerning about why nude women would have been more socially acceptable than nude men) or to Samuel De Cubber for M7 again by Saint Laurent. In Jacobs the portrait is more exquisitely patinated and ambiguous, more sexually prêt-à-coucher than sensual and erotic and maybe that's why it seems more gaudy and amused.
The olfactory signature instead is the one of  Yann Vasnier (L'homme de coeur, Lola, Panache) of Givaudan that for Mr. Jacobs interprets the onomatopoeic sound aroud the note of pepper. "Pepper has always been my favourite spice, I like the way it hits" states Mark on the perfume website. Actually the scent doesn't hit at all like one would expect it to do, like if it really would hit in your face with the same strength as the writing Bang seems to wrap the botttle designed by Harry Allen. Instead Bang, like the Nancy Sinatra quote, is like firing blanks, a naughty game unvealing a considerable quality fragrance for the mass market, gently woody with green-spicy tones out of the easily appealing crowd of the Iso E Super at the n-th power.
The declared pyramid features topnotes of white, pink and black pepper, the heart is made of "primal masculine woods" and the base has benzoin, vetiver, white moss and patchouli.
As you spray it you'd expect to be invaded by a balsamic wave like in Lorenzo Villoresi's Piper Nigrum, instead the opening brings a green wet pepper with smoky tones mixed to woody-rosy facets, an almost comforting note, balsamic yet very soft. The heart of the fragrance reveals more lemony facets probably given by the elemi and by a rosy note making the scent warmer and beaming, opening the way to the base. Finally the base warms with a slightly ambery sensation of benzoin and a pale shade of dry woods, vetiver, cedarwood and redwood for a very soft yet transparent result, a modern aura abstract like the morning light passing through the branches of a wood, you can see it but you cannot grab it. Sillage is intimist like a skin-scent, too bad also the lasting power is of few hours, it would have been fantastic if  everything would have been doubled at least. Anyway once in a while you can feel that also in a commercial perfume a brand can still put a decent budget obtaining something valuable tu buy affordably not just for the first five minutes "nosecatching" opening notes but aso for the pleasure of the rest of the time.
Invia tramite emailPostalo sul blogCondividi su TwitterCondividi su FacebookCondividi su Pinterest