1-1-'11. One number only. One. While everybody is preparing to close the passed 2010 with top tens about the best and the worst of this year, among niche and commercial, summing up and giving numbers, I've as well decided to start the new year just from a number, a number one, a black number: Nombre Noir.

There are unexpected encounters that take your breath away and you can't believe they're happening right to you. Olfactory speaking it happens when suddenly you find a rare gem on a forgotten shelf that was waiting just for you, you just come over there almost hearing it calling your name. 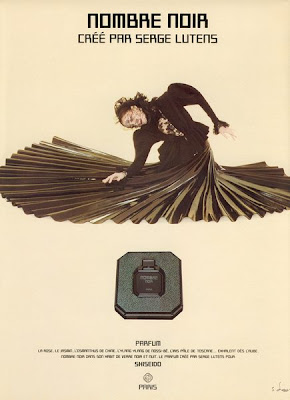 It's been like this for Nombre Noir and my friend Lady in Black that incredulously held the precious black prism containing the eau de parfum in her lap as a baby, fragile and unique. That moment the emotion was so strong to allow her only to whisper "Mags! Mags!" I looked at her astonished eyes and right after I was ravished by the ephemeral treasure. It's been incredible to share such amazement!
No need to mention how trembling her hands were while trying to open the bottle still untouched after decades. So I took the initiative: I was myself moved by the overwhelming emotion hearing the click of the stopper under my fingers. Few seconds later there was silence while sniffing the marvel of the perfume still undamaged after the journey through time. Perfect from top to bottom. About the myth of Nombre Noir from Luca Turin onwards we know the mystery by now. Yet the perfume still keeps its magic with it, the footprint of that unmistakable style that many years later has pervaded the creation of the Les Salons du Palais Royal line.
Nombre Noir was born in 1981 when Shiseido wanted to launch her first western style fragrance. At that time the artistic directors Serge Lutens and Yusui Kumai developed the fragrance in collaboration with a Shiseido in-house perfumer Jean-Yves Leroy and the packaging with Shuichi Ikeda e Masataka Matsubara that for the parfum was an hyperbolic luxurious zen packaging where the pure octagonal geometry of the glass bottle war nested in exquisitely folded black origami.
Lutens chose for the fragrance a top quality natural osmanthus absolute overdosed in synthetic damascones. These latters capture the most winey aspects of a rose, with facets of red berries, plum, woods and tobacco just like a good full-bodied red wine. After having been fascinated years before, Luca Turin wrote to have lost the magic of this scented cabal after discovering with some analysis that the main components were four types of damascone and hedione. This magic synthetic molecule, discovered in the Firmenich labs in 1959 gives a shiny aura like a jasmin-like dew to everything it touches as it happens in Odeur 53 (1998) by Comme des Garcons where the overdose of hedione does the magic on a aldehydes and synthetic musks base you could exchange for laundry detergent otherwise.

What happens that's really mystical in Nombre Noir is a dry ikebana where the nocturnal boozy rose full of damascones gets incredibly tactile thanks to the "apricot skin" of the osmanthus absolute, almost like you could feel under your fingertips the dark velvet of the shot petals sprinkled in hedione dew drops. It exudes the charm and sensuality of a Mishima dark heroine, sedate mask in a black origami dress yet burning of carnal impetus, hidden sensuality, fire under the ashes, such a neat sensuality that's perfect also for a contemporary dandy.
The pyramid states as topnotes: aldehydes, coriander, bergamot, marjorain, rosewood. Heartnotes: rose, geranium, orris, jasmin, ylang-ylang, carnation, muguet, osmanthus. Basenotes: sandalwood, vetiver, honey, amber, musk, benzoin, tonka, cedars.
Notes are seamlessly joined together, in a wonderful balance, briefly introduced by an opening with aldehides and green notes enforcing the fruity sensation of redcurrant and light underbrush foliage. Fortunately the topnotes perfectly preserved shine in all their freshness, almost like the glossy berries would shine like rubies in the shade. Slowly blooms then the beautiful drunken heart in all its dry somptuousness to reveal later a solid base, like a basso continuo for cello and contrabass with their warm woods and their resinous crescendo wrapped in light smoked swirls.
For sure we will never know whether they discontinued this rare beauty for the high presence of photosensible damascones therefore highly instable or because of the expensive packaging or for the too expensive osmanthus absolute or again for the unlucky commercial destiny to be too ahead to be understood for what, nowadays looks for sure like a prophetic perfume that anticipated by decades olfactive trends reissued later also by Serge Lutens himself. That's truly a number one.
Invia tramite emailPostalo sul blogCondividi su TwitterCondividi su FacebookCondividi su Pinterest