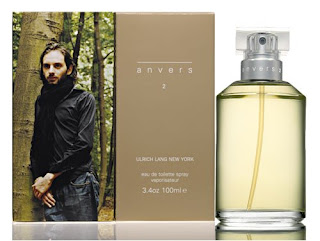 At the end of our game, after travelling through time and space, we've landed nowadays in a precise place: Anvers. European center where different cultures melt and where contemporary architecture mixes with the classical one, it's since ever a market for arts in every form. It's right to Anvers that Ulrich Lang, famous art publisher passionate about photography and above all eclectic person fascinated since ever about perfumes dedicated his first two fragrances. The one I chose for the round #3 is Anvers 2 (Bravo Saraprfms).
The fragrance is a modern masculine oriental with a decidedly unisex appeal (Bravo Woody Freak) taking inspiration from the mitteleuropean heritage related both to Anvers and to Ulrich german origins. In particular this can be smelled from the citrus topnotes with a green cypress and a spicy pepper where the characterizing rubharb touch stands out (some of you felt it though). Here like in german pastry, it's used to balance the sweetness of vanilla, tonka bean and blond woods featuring a distinct smoked sandalwood note in the base. Finally like many of you highlighted, there a particularly rich floral heart with bulgarian rose, jasmin, lily and mimosa giving a lively tone to the composition (Rizzo, Mozart, Can Can, Zia Mame).

Marcopietro
Luminous opening, a very good floral fresh, a delicate accord of floral notes where I barely distinguish the components, maybe rose and jasmine or lily? I don't know but for sure they are in an unripe interpretation. Some green woody notes of a more mature base of sandalwood. As it warms I seem to smell slightly smoky and aromatic notes, maybe sweet tobacco leaves. It's fascinating and charming, really a good vibe, almost ipnotic. Projection is discrete with a good staying power, in the end it gets sweeter… a sublime caress. It's the most feminine scent among the three, but I'd wear it without problem.

Let's see, this si a gentle perfume but I'm not able to give it a gender even if it seems an aromatic sweet fougèere (inexistent cathegory by the way. The opening is stinging (lavandin?) with a green aromatic note remenbering absinth. Lasting power is minimal, it fades out quickly to give a vague vanillic sweet impression.
Saraprfms
I admit the effort not always successful of describing the sensations felt during a blind sniff made me go beyond the quick and simple like/don't like... saying this I don't mean it could influence significantly the personal taste, but it forces to pay attention to particular details that one would skip otherwise. I wish I could have time enough to do the same for all the vials I have, it'd be an interesting exercise.
Here we have the most sensual perfume of the three mystery vials. Like the others it has a citrus opening but warm, it immediately gives positive energy, self-confidence…. citrus – mostly bergamot I mean - gets softer giving space to a very particular aroma (I don't recognize it but I trust Mags will reveal it) that goes very well with sandalwood and dominates powerfully along all the development of the fragrance. Also here, clearer than in vial #2, there are florals... I don't know if I can call it masculine, but I know I'd like to wear it.
Finally, maybe not, but I guess I got the name (if not it's anyway very similar). Here the connection to what I said at the beginning, having known this perfume at last Pitti Fragranze this year, I've classified it as a pleasant aroma but without the blind sniff I would never liked it like it deserves: Anvers 2 – Ulrich Lang.

Tamberlick
Here I'm going to be very terse. I like the perfume, I smell a livery opening, gaudy and citrussy making me think to orange peel: sweet but not too much.
Later appears a facet I can't describe... I'd say almost bitter almond very tamed down. I can't say anything more, but...Altro non riconosco

If the first one was a feminine juice dressed up as a masculine, this could be a masculine dressed up as a feminine? Well, who knows. What's for sure (let's say), is I smell fruits, flowers, a soapy sweet idea... if it'd be a masculine one, it would be anyway a lustful masculine, a man devoted to pleasures and women. Ananas, jasmin, rose, maybe an idea of red fruits, tonka bean? Something vanillic and sweet; "it has a backtaste" almost camphoraceous and I wouldn't be surprised to discover it has some patchouli inside even if I admit I can't really feel it in the composition. I don't know but I'm totally eager to know what's this juice, I've got an idea but after the big blunders I made with this game better I don't risk anymore!
<Blind Sniff Roulette #1>   <Blind Sniff Roulette #2>