Every year companies producing raw materials commission inquiries about tendencies and what will be in fashion, or to better say, what fragrance custumers will be willing to buy. The study tries to forecast it basing upon what's turn up and down with your comments on forums, blogs, surveys and interviews and what you've bought lately.
The last year at Pitti Fragranze they shown a neat craving for greenery, for corroborating yet relaxing notes among which I noticed a new attention towards balsamic and aromatic smells and in particular towards mint and geranium as already previewed with the launch of Editions de Parfums Frédéric Malle's Geranium pour Monsieur by Dominique Ropion.
Atually a tendency doesn't invent anything new but it simply sniffs (that's really the case) what's new going on in the air, so I got curious about some pre-tendency creations featuring notes of mint and geranium. Besides minty notes have also the merit of giving an immediate fresh sensation hence they'd be perfect for a chilling cologne. Just one risk: the mouthwash effect if the perfumer doesn't balance it properly in a composition. 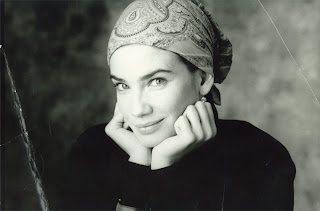 Olivia Giacobetti (Diptyque Philosykos, Artisan Parfumeur Dzing, Lubin Idole...), french nose from italian ancestors, is well known for two reasons: the first one is her ability to build what I like to define transparent architettures, in other words compositions that dare also with quite dense raw materials and with complex structures and nevertheless they manage to keep translucent, airy. The second one is the taste she has for translating in olfactory language the atmosphere and light of a place like she succeded to do with Costes for the famous Hôtel Costes in Paris.
While testing some colognes with minty and refreshing tones I discovered some nice creationg keeping Olivia's olfactory trademark: I'm speaking of two brume de soin concocted for Cinq Mondes where you can find the bien-être of this luxury parisian spa born in 2001 and nowadays counting more than four hundred wellness centers in twenty countries. Both these colognes created as all over body and hair mists and even for scenting the bed linen, speak about faraway countries, their traditional rituals with ointments, scented oils and burnt aromas filling the air to celebrate the cult of themselves. 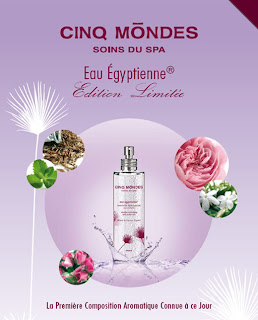 Rituel de Louxor - Egypte
Eau Egyptienne (2005):
Kyphi, the mythical wonderful ointment (according to Plutarc it had the power to releave daily tensions and brighten the mind, cleanse the body and bring restful sleep with vivid dreams) is said to have been created for Hatshepsut (Nefertiti) and is reinvented here à la Giacobetti translating it into a unisex cologne to revive themselves from the heat of nowadays metropolitan Egypt. The opening is iced with mint joined together with a delicate watery floral tone preventing it any toothpaste reference since the beginning. To emphasize the vegetal aspect mastic is added with its beautiful mediterranean scrub facets. Brilliant the idea to make the heart gentler letting bloom a rosy and diffusive note, probably anplified by a cocktail of salicilates that conjure up the steam of a relaxing bath lying among rose petals floating on the water. The light sillage is empowered by a resinous base of myrrh and Tolu balm made mysterious by a whiff of incense that shifts the aroma close to a sacred balm, one of those you imagine inside a precious canopi, an accord that's the trait d'union for the other concoctions for the Spa. A must try the 15ml format with a very good price, easy also to put in the luggage for the vacations when you want tu put on an easy yet not trivial juice. 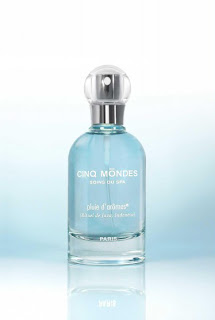 Rituel de Java - Indonésie (2008):
decidedly more masculine than  Eau Egyptienne, this energizing mist  suitable for reflection and decision making accordin to Cing Mondes, winks at the indonesian tiger recalling the balsam used by expert hands where to drop themselves for an invigorating massage to fatigued muscles. Too bad it's not anymore in production (you can still find it only as essential oil or bath oli or relaxing candle) because it would appeal for sure to who loved the original James Heeley's Esprit du Tigre of which it features the tiger balm-cinnamon combo. Rituel de Java is neatly less camphoraceous and melts in a hot-cold play the vivacity of eucaliptus and cinnamon stripping it of any edible connotation. The fragrance is glued to the skin with its slight spiciness by a generous load of addictive Perù balm with its mellow texture, a little bit woody (cedarwood and patchouli) and powdery that makes it far more longlasting than the british tiger.

As for reflection and important decision making for sure some days of meditation spent in a luxury Cinq Mondes spa would be more helpful but meanwhile one can at least close his eyes, take a deep breath and enjoy the wellness exuding from these conforting baumes.
Invia tramite emailPostalo sul blogCondividi su TwitterCondividi su FacebookCondividi su Pinterest