"True simplicity, which gives great composers that touch of class, is not the result of a display of ostentation in the midst of poverty, but rather a show of modesty in the midst of wealth" E. Roudnitska 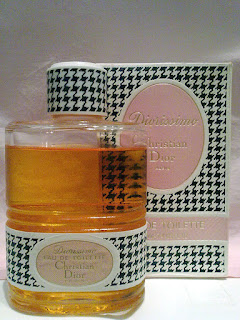 Simplicity, this is the secret suggested by Edmond Roudnitska as a guideline for the creation of an original perfume. Diorissimo to me is not only about simplicity but also about innocence. It's the smell of a fairy realm, a world that existed just in my fantasy. When I was a child I used to play close to an ancient decaying palace and I looked forward for spring to come to see the garden covering in lilies of the valley. I could lean in through the damaged gate to pick flowers and sniff smells: the mossy shadow of the walnut tree and the carpet of foliage scattered with white little bells releasing their irresistible call together with dog roses. That fairy smell and the imposimg palace got me dreaming on imaginary animals, unicorns, ladies and knights.

When I smelled Diorissimo for the first time some years later, I not only had my proustian "madeleine" about the fairy garden but I had my grown up mind back running after unicorns through the lilies of the valley. When Christian Dior visited Edmond and Thérère Roudnitska in Cabris in 1955 and smelled the muguet themed fragrance Edmond was working on since years he said "This will be my next perfume". I can understand why.


Since the time of Charles IX, for french people lily of the valley has always been the symbol of spring and it's custom to give it as a lucky charm on May day. To both Christian and Edmond it was even more meaningful. To the first it was a memory of his happy childhood in Granville and the lucky charm he displayed during nine years of successful catwalks: there was always at least a model popping out with a bunch of lilies of the valley and sometimes the white bells became decorations for dresses and hats. To Edmond it represented the walks with Thérèse around Paris, when he used to pick for her bunches of muguet. He loved so much the smell he even planted a large carpet of muguets in their garden to study it. But siince from lily of the valley you can't extract any essence, its perfume was also a challenge that would have led him to conceive a brand-new olfactory esthetics opposite to the heavy sweet perfumes from the past.

I looked for a bottle of vintage Diorissimo for years. It was destiny for me to find it right in the days the dear Mona di Orio letf us, Roudnitska's protégé that during these last years left us the most meaningful outcomes of her master's lesson.
Despite many use to label it as a soliflore, Diorissimo is far more than a lily of the valley scent and goes from the bright green top to the bucolic heart showing muguet in glory with hints of honeyed rose, saucy lilac and carnal jasmin. The base is light and just holds the floral trail with sandalwood, musks and a touch of oakmoss giving it a slightly chypre echo.

In 1956 when this green youthful juice smelling so natural despite its 80% synthetic formula was launched, it was so groundbreaking that it became instantly a hit. Thinking about olfaction, Roudnitska understood that redundance and too intense notes saturate the nose and can't be smelled. so they're a waste of raw materials. On the contrary light notes are amplyfied to smell them better. Keeping these rules in mind he made of Diorissimo the manifesto of a modern composing style, cleansed from the excesses of kilometric formulae that will be his olfactory signature. It makes me so sad to think nowadays eau de toilette got killed by IFRA and not due to a natural but to a sintetic: hydroxycitronellal that's one of the main components rendering that amazing green-rosy lily of the valley impression and now limited to no more than 1% of the formula. Neither Francois Demachy with his recently launched eau de parfum has succeded in giving a pale memory of its original grace. By now I enjoy my vintage bottle but I regret a bit every drop I put on: one day I will be left alone with my fantasy in a fairy garden with unicorns and ladies.