The third edition of Smell - Festival Internazionale dell'Olfatto has been very involving and the dawn theme has allowed Francesca Faruolo's team to shine for always being able to find unusual stimuli and unexplored paths to sense the mysterious land of olfactory culture.
Just think how many times you stick your nose into the coffee, maybe to cleanse it from olfactory fatigue during a sniffathon but have you ever truly appreciated the coffee aroma in all its facets? It's been pure genius to start saturday morning with a workshop named "The nose into the coffee". After all there's no dawn without a good coffee. Artisans and roasters of gourmet coffee at Torrefazione Caffè Lelli, Leonardo and Lisa Lelli nicely guided us with ability through the process of growing, processing and roasting and to reply at Leonardo's teaser "Do you expect to drink coffee?" I enjoyed sniffing different varieties of coffee-beans discovering how ignorant I am about what's behind the coffee cup. 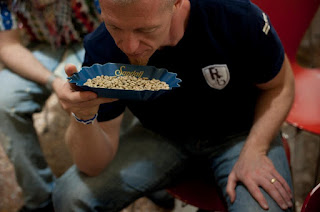 Do you know when coffee blooms? How it grows or when it's harvested? Whereas I know all these things about tea, I was completely ignorant about coffee. Coffee plant is part of the rudiacee family and is originary from Africa, precisely from Ethiopia and later spread throughout India, Indonesia and South America and only after WWII reached Brazil even if it's now the first producer worldwide. As for jasmin and rose, there are also for coffee different species among which the most known are Arabica (Ethiopia) and Robusta, discovered only during the last century in Congo but there are also other species just recently discovered.
Of course every specie has its own olfactory characteristics according to variety and origins, depending on the vegetation surrounding them and sharing biologic material. Unfortunately we lack the education to understand these details since most ot the coffees we can find around are mixes of various species. Coffee flower exudes the sweet ipnotic perfume typical of white flowers like jasmin and once ripe it becomes a cherry-like berry which stones are used. The seeds are then extracted by drying or squeezing them (natural coffee), or washing and fermentation (washed coffee). These two methods result into completely different aromas but in both cases incredibly rich: there are almost one thousand smelling molecules in them, at least four times the ones in wine. So the more aromatic it is, the higher the quality. 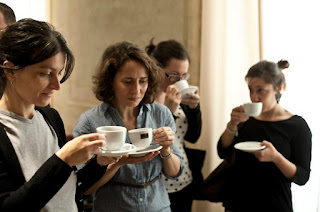 The commonplace says we're all great coffee connoisseurs in Italy but it's enough to go to a bar to see there are several kind of vines but you can get just one kind of coffee if you order an espresso. After all in our country coffee has become an affordable everyday treat only in the postwar period while before people used to drink chicory (who remembers the Frank?)
The italian scene is crowded with many torrefactions but only a few aim to promote coffee culture and quality. Most of them and also some great groups are more specialized in creating mixes while overseas they focus more on single variesties of coffee.
After replying to thousand questions, Mister Leonardo finally led us put our nose into different coffee qualities: raw beans of Robusta Canefora from Java with its herbaceous and hay-like tones and later both raw and roasted and ground Sidamo, an intense and fruity coffee growing on the volcanic uplands of Ethiopia. As a comparison with the coffee we absently drink everyday, we had a sniff to a commercial mix, not bad but definitely flat respect to the blaze of aromas we had before.
And after sticking the nose into it, everybody was too curious not to have a good coffee cup of Sidamo and it tasted so mellow that seemed a crime to put sugar in it.

Dear Ermano, as a Brazilian I grew up in the coffee tradition. So I can say a few things about coffee:
Coffee has a flowering that is very short and in order to capture the scent, a perfumer I know stayed all night long during 3 days to succeed to capture enough of it to create a fragrance sold here with coffee bloom.
Also as a child we travelled to santos where the museum of coffee was established. We learned everything about the process of making coffee.
Coffee experts do not swallow coffee (NEVER), the taste on the mouth and they spit. The quality test is quite unpleasant for us coffee lovers.
I once drank a blend of Jamaican - Ethiopian - Javanese coffee that was simply heavenly!!! It was at Greg cafe in Israel, when the was owned by Oded, a friend of mine, he gave us to make our own blends when customers were not around ;-)
The best cappuccino ever I drank in Greece - In one island that I don't really recall the name. Quite surprising. Also the person who paid for my coffee - The president of Coca-Cola!!! I did not know that at that time. :-)
Anyways, I have a coffee bush here in my garden and I tried to dry the beans by myself - needless to say that the coffee was not that good...