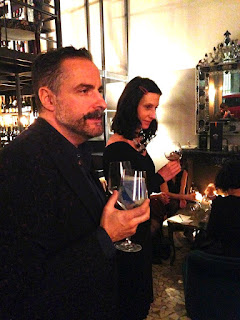 As Stefania tells, elegant sylph in a black low-cut dress, the tasting wants to introduce us to four different characters: the radical-chic, the unexpected, the elegant and the country gentleman.
The first character is a young man, non-conformist yet bound to tradition, a man who wants to be notices but above all to be remembered. It's a bitter with typical orange notes and an aromatic spiced heart. We're speaking of Bitter Radicale Gagliardo made through maceration of herbs and spices. It's late afternoon, so perfect for the happy hour and the corroborating bitter aroma is simply mouth-watering. Antonio, tweed jacket and hipster curled mustache, pairs it to the oriental bouquet of Majda Bekkali Mon Nom est Rouge with elemi, black pepper, pink peppercorn, ginger and cinnamon hot mix and the metallic chill of rose, geranium and incense. Perfect match as it always brings also to my nose the teasing glimpse of an americano made with a good bitter. 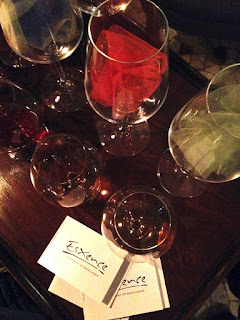 The second character is surprising: he's an artist, a dandy with a complex personality and of course he stands out. Filliers Dry Gin 28 Sloe Gin is a dark gin revealing unusual smells of ripe cherry and fig, juicy and pulpy wed to the dry, balmy aroma of juniper. Stefania explains us a distillate should be tasted bringing the glass to the heart while briefing deeply. This is the safety distance to understand whether we're in front of something harmful or not. To fully enjoy it, a distillate should be sniffed first with a nostril, then with the other and finally with both to get the different perceptions. If we get the same, then it's ok to drink it.
Matching a single scent with such compelling distillate was quite a challenge, so Antonio proposed the peppery sparkle of Penhaligon's Juniper Sling layered to Frapin 1697 with its cherry pie almondy sweetness. The layering is pretty good, but I am totally blown by the liqueur and I decide I can't leave without drinking it.

The third character presented is an elegant man with a white Panama hat and a cigar, the cool attitude of who lived intensely yet still dares to explore the darker corners of his soul. Made from 80% of sugar cane juice and only 20% of molasses, Diplomatico Ron Reserva Exclusiva is a dark rhum with an opulent colour and a sweet spicy aroma, strong and enveloping as an embrace. Perfect pairing is Noir Obscur conconted by Antonio Alessandria himself around the note of rhum juxtaposed by a mix of spices, saffron, black and white pepper smoothed by the fruity mellowness of davana, osmanthus and amber. 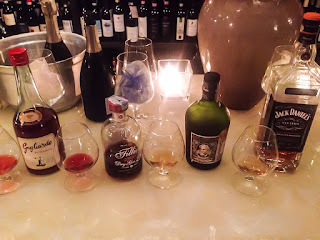 The last character is the roughest but not the least charming. Strong identity, he likes countryside and relaxed elegance but he can't help but loving the most precious details. We're talking about a Jack Daniel's Sinatra Select, a particular quality of single barrel, made with the special "Sinatra barrels" giving it woody and vanilla flavors, just created to pay a tribute to Ol'Blue Eyes who was Jack's dear friend. Unexpected to the point I even didn't recognize it at first, the proposed pairing with Eau d'Italie Bois d'Ombrie. Its vegetal, slightly smoked texture goes pretty nicely with the tough essence of whiskey, while the powdery drydown with iris and tobacco is the most tempting complement to the single barrel vanilla. Now just give me a light mist out of the window and a crackling fireplace to squat down listening to The Voice.
Invia tramite emailPostalo sul blogCondividi su TwitterCondividi su FacebookCondividi su Pinterest