The 2017 edition of OSA! Outsider Scents Award has just ended and emotions still flow intense like the winning fragrance: HUMUS, composed by Michele Bianchi.
This year's theme, the same for the Smell Festival 8th edition with which have dealed the participants is "roots" and each finalist has given his own personal interpretation to it.
As well described by Francesca Faruolo: “Who is familiar with smells has strong roots: undergoing principle of development and nourishment of everything”. And it's creativity the root that fed and developed the desire of these outsiders to train themselves, digging into the knowledge of raw materials of perfumery to dare and harvest the fruit of this path. Let's discover the winner then. In the next post we will talk about the other finalists: meeting them in Bologna I asked them a few questions to learn more about them. 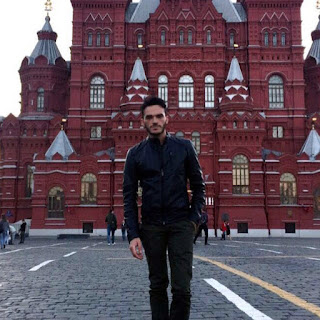 Michele Bianchi, first place with HUMUS is born and grew up in San Paolo di Civitate near Foggia where he has well set his apulian "roots". After graduating in Russian Language and translation, now he lives and works teaching Italian in Moscow. Since he was a child, he's fascinated by arts and perfumery but only in Russia that he defines his second home, he met people who addressed him to attend masterclasses with Russian perfumers.

E: What's the perfume you wish you created (from every era) and why?M: I wish I could have invented Bal à Versailles by Jean Desprez (1962). It's not that simple to describe the feelings it gives to my senses. It really takes you back in time to the French palace of mirrors, through its dirty-sweet, floral, smoky oriental character which seems to be a bit "too much" at the beginning, but at the end It really blows your senses through the animalic and vanilla shades. I wish I could have conceived handled every single layer of this scent with my own mind and my own hands. It's a real masterpiece, which gives pleasure to all my senses and involves all my emotions at once. Plus, there is also a personal reason that connects me to the magnificence of this composition. It cannot be defined a perfume, but a masterpiece of perfumery.


E: How do you see perfumery and people's approach to smell in the future?
M: As to the future of perfumery, I think it has been changing as the approach of people to smell.
I think fragrance gives you the chance to be perceived the way you want people to perceive you: it is an emotional and intimate accessory, and today the technology has been giving the chance to capture much more raw materials than the past, opening the ways to some kind of new trends and uncommon, but more specific fragrances to everyone's personality. There are people who will still continue to feel confident wearing a big-brended scent, and there are people who will look for the unusual, but more personal, individual fragrances, which are being created thanks to the enhancement of perfumery techniques. There will also be those who will appreciate only organical scents. The future of smell is for everyone!
I am actually attracted by the way scientists ‘recreate nature’ in laboratories, I find it interesting to handle the synthetic molecules along with the natural oils. It opens the ways to the fantasy of the perfumers and gives much more chances to an individual to find his/her own fragrance.

The jury awarded HUMUS, the fragrance composed by Michele with the following motivation:
"The jury of experts has considered the composition fully pertinent to the “roots” theme and has greatly appreciated the concept connecting the creator’s childhood memories to the earthy aroma from the sugarbeet fields in Puglia for a bright composition with a sharp and hyperrealistic cut that places it close to the great contemporary ambery-woods rich with contrasts across atmospheric, mineral and edible suggestion. In particolar Michele Bianchi stands out for a meticulous choice of the olfactory palette featuring oud, rhum, ge-osmine and patchouli roots oil, balancing so at best tradition and innovation, nature and synthesis to tinge Humus with an ancestral yet contemporary sensuality".