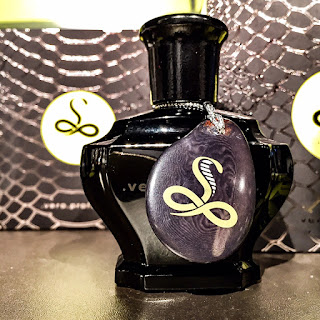 In nowadays fragrant universe where brands launch several perfumes per year, there's a woman who turned time into the highest form of luxury. Releasing only five perfumes in parfum, voile de parfum and eau de parfum, in ten years Vero Kern took her time to look after every detail seized with a wonderful obsession.
Impossible to remain indifferent, her creations take ho prisoners and for who loves them every launch is a major event. That's why curiosity killed us in the long wait for this decennial at every juicy hint, including golden snakes, shamans, tobacco botanical prints and more Vero scattered through the pleats of social networks.
Like Hop o' My Thumb I followed the small pebbles till Esxence craving to discover Naja, the Jubilee scent.

Leather jacket and glam-rock python glasses, a Vero in great shape welcomes me at her booth. In a quite moment we take the chance to sit and smell together the raw materials featured in the Naja palette: warm, honeyed and hay-like tobacco absolute, but also the pulpy suede of roaring osmanthus absolute. Then the tempting roughness of a special leather base Vero herself concocted together with a summery reconstruction of linden blossom.
As I spray Naja I am amazed: honey, leather and tobacco are there as promised with their deco accent, but moulded by her visionary creativity to a floriental bearing a skin as iridescent as the brand new moult of a cobra.


Just long enough to inhale the sunshine of linden blossoms (a sacred tree in german mythology with healing powers)  and topnotes get juicy with sweet melon and its vibrant dew redolent of Diorella that for me is a Linus's branket: it smells of end of school days and the endless daylight of my childhood birthdays.
Naja (pronounced with a French j like in Jean), from the Sanskrit nāga means snake and it's referred to a genus of venomous snakes including the cobra. Naja is also an old cigarets brand advertised as "oriental tobacco" very popular in Paris before WWII.
This oriental tobacco is right what starts pulsing, more manly and spicy with nutmeg in the heart bringing one more example of how skillfully Vero masters opposites, masculine and feminine, smoke addiction and healing virtues of tobacco well represented by the mortal coils of the snake winding around the rod of Asclepius or in the infinite symbol on the Naja bottle wishing many more creations to come.

Tobacco is a powerful psychotrope also invonved in the Natives rituals. The snake, later charged of evil meanings in the Christian culture, since the Minoan civilization was a symbol of procreative force representing in the snake dance both the sacred masculine and feminine. The Hopi and Navajo tribes from Arizona believe snakes to be otherworldly messengers. Invoking their vital force and the rain, shamans dance letting the reptiles enter their mouths and releasing them then so they can carry prayers to the spirits underground.
The powdery, intoxicating trail of Naja gives way to a uberchic suede, more angelic and yet dangerous as the leather in Tabac Blond joining what's left from fruits and honey to the cold scales of vetiver that Vero masterfully showed in Onda.
I spray Naja and let it wind around my neck working out its ritual. It finds its way inside me to listen to my thoughts, dancing to the rhythm of my heart under my skin before hovering to bring them to the spirits who can understand the magical language of perfumery.