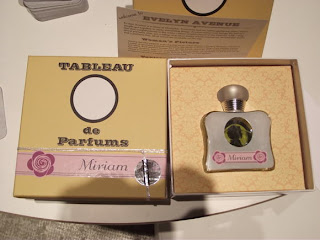 Tableau de Parfums is a smart idea born from the artistic collaboration between the american director Brian Pera and Andy Tauer. Even if officially it wasn't present in the brands list displaying at Pitti, what a better occasion to give out a preview to italian and european perfume enthusiasts as the fragrance will be launched in Italy the next year and by now it will be available just in the States? Upon my request Andy radiant didn't wait for me to twice-tell him and pulled out by surprise a curious packaging.
Woman's Picture is the project grown up in the virtual place of Evelyn Avenue aiming to tell about movies displaying woman's portraits inspired by the female characters in thirties, forties and fifties movies. It's inside this space that Brian and Andy, despite never meeting each other in person but just virtually or by phone, decided to collaborate putting together memories, fragrances and personas. 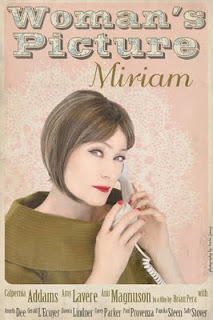 The successful union of these artistic expressions brings to life an unusual packaging, a sort of time capsule with a retro vibe containing a perfume housed in a bottle as solid and curvaceous as the feminine prototype back in time, a DVD with the short describing the story of this woman's picture and of course her stylized portrait framed in a oval.
This one telling Miriam's history, her feelings and her perfume is just the first of three portraits to which will follow other two ladies stories, Ingrid and Loretta. The scent is also at the center of the plot as the last memory Miriam has of her mother as a young lady as now she's shattered by dementiae. A Baccarat crystal flacon without a label holds the last decant of this maternal memories juice that the sensitive Miriam uses to cuddle herself in the most intimate moments. What will happen when the insensitive Miriam's man won't pay attention smashing it? To know more we can only refer to Brian's tale, maybe spraying themselves with Miriam. 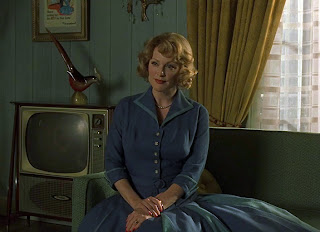 The fragrance is an aldehydic-floral taking inspiration from the great french perfumery of the forties and the fifties. The image it conjures up is a Stepford wife, perfect mother and housewife with medium-cut hair gracefully combed, her shape is shapely yet well-proportioned and smartly dressed with a v-neck dress and three-quarter sleeves, medium heels shoes and a string of pearls, the kind of woman so beloved by Hollywood golden age, as reassuring outside as restless inside to which Julienne Moore pays homage in Far from heaven.

The opening is hugely diffusive with hesperidic fresh aldehydes, almost sparkling and keeping under the starting brightness a radiant bouquet of soft white flowers, a blast of petals ruled by the fresh facet of rose and soapy neroli. Right after this luminous garden there's some shade where violets grow which leaves natural essence give its green temper to the perfume. As slowly the human side of these women came out, so Miriam warms up letting bloom the mellow facets of jasmine and ylang ylang introducing the gently ambery base typical of florals like Nina Ricci's Coeur-Joie or even L'air du Temps loaded with powdery musk ambrette. In fact it is above all the base of this perfume shows Andy's signature with a slightly woody sandalwood trace smoothed with vanilla and tonka bean and made sensual by animal amber echoing to Zeta, contrasting the clean powdery musks bringing a faint impression of Orange Star.

Who thinks it's easy nowadays to recreate this kind of scents or again who's wondering what's the meaning of making this first of all should understand how primary here is the choice of natural raw materials to obtain the desired result that means curiosity and research but above all a good knowledge of essences available in the past and present. True modernity lies also there to me, not in a nostalgic revival but in the search for revisiting the past, reinterpreted with today's taste and materials to reinvent the ones that don't exist anymore or are not allowed anymore and putting a signature like Andy does. The result might not be everybody's cup of tea but it is not less experimental from an artistic point of view than trying to invent something never smelled before and it is the umpteenth proof of Herr Tauer's versatility.
Invia tramite emailPostalo sul blogCondividi su TwitterCondividi su FacebookCondividi su Pinterest

Miriam sounds very tempting. I enjoyed reading your impressions of it. There are two things I personally find a bit scary. Well scary might not be the best word to describe it. Aldehydes and Jasmin can be a problem. It all depends on (maybe?) concentration of the same? I have a few fragrances which have aldehydes and work well for my nose. I had one that made me run fast. Jasmin in general makes me run into the other direction. There are very few fragrances I own with Jasmin which dont cause this reaction. So I really hope my travels will either lead me to Milan to try Miriam or to the US. It really seems to be a must try for me. Despite aldehydes and jasmin

Dear Betty,
Miriam is definitely more than jasmine and aldehydes and bares the impression of a white floral bouquet with a wide range of facets. For Andy's lovers is a must try. Looking forward to know your comments about it my friend :)