Certainly walking through the stands at Pitti Fragranze this year one couldn't avoid to remark how many new brands are born even just in the last year in the indie parfumery market. Just by looking at the display map it was possible to argue that one forth of the space available was assigned to the Spring section. That's the spring where recently launched brands or newborn brands not yet present in the stores can bloom. As predicted also by Michael Edwards in his conference at Esxence 2011 about the future of artistic perfumery, facing such a great expansion of the offer or to say it using the fancy words of a friend, facing that the niche has become a nave made creators already present to react raising the bar replying with luxury for the most demanding clients. Niche lines into the niche pop out like in a game made of exclusive packagings, top quality fragrances proposed in higher concentrations and even in pure perfume to be worn making you feel unique and special. 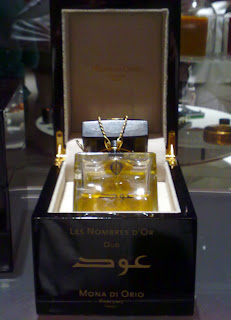 The first creation I was eager to smell again in its final version was Mona di Orio's Oud from Les Nombres d'Or line presented in a sumptuous laquered black and gold packaging worthy of a sheikh. I already talked about it but I confirm the impression I had the last spring: a breathtaking fragrance played on the fresh combination of oud and osmanthus starting something thrilling that envelops you for the whole day showing on the skin an extraordinary range of facets. Im pretty sure this oud will become a reference for the fragrances built on this precious essence.
Also James Heeley well known for his lightweight architectures, got tempted by the texture of pure perfume creating a triptych of perfumes Agarwoud, L'Amandiere and Bubblegum Chic, bottled in an exclusive grey/silver packaging topped by a black cut crystal cap.
Bespoke, term used to identify perfumery excellence is the name chosen by Keiko Mecheri for her exclusive line that will feature eight new fragrances four of which were presented in Florence.
For the Christmas season Maison Robert Piguet points to the extra-luxury too with a shimmering packaging for the classic Fracas that will get dressed in a Swarovski crystals evening dress to be also visually even more exuberant, more diva than ever. 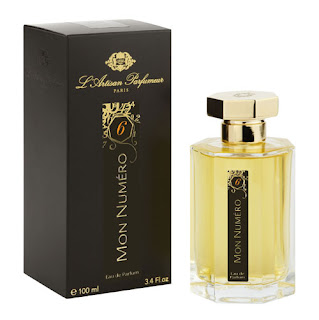 Excellence and exclusiveness comes also from Artisan Parfumeur launching its collection Mon Numero in grand style with a meeting with the extraordinary Bertrand Duchaufour that revealed the creative path behind these new fragrances. Following what other brands like Le Labo already did, exclusiveness in this case is also geographic because each number will be under sole rights of sale for any country. Number 6 is the one chosen for Italy, a hot interpretation of the floral-ozonic theme like only the genius Duchaufour could conceive. Damn! It won me straightaway so I couldn't resist to try it on skin and by then it directly joined my wishlist, hence I'll tell you about it soon.
Invia tramite emailPostalo sul blogCondividi su TwitterCondividi su FacebookCondividi su Pinterest