A toast for Fragrances of the World: interview with Michael Edwards (2) 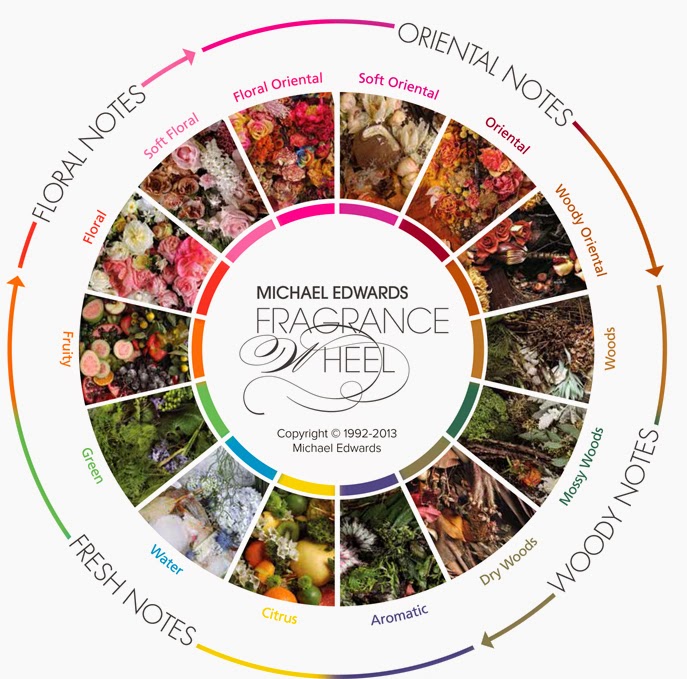 If like me you couldn't help but deeply admire Michael Edwards for the surgical precision of his words and for his intellectual honesty, you will surely be even more pleased to read the second part of the interview celebrating Fragrances of the World of course where Michael took the chance to disclose a couple of truths about the future of perfumery.

E: For the 30th Anniversary Edition, your famous Fragrance Wheel comes to life with a pictorial timeline showing the evolution of the iconic fragrances within each family. Would you like to tell me more about this evolution and how families have changed during the years?
M: For my 30th year what I realized I left on my back a lot of iconic fragrances. So I thought it would have been rather interesting if I gave you a timeline showing you in each family how the fragrances have developed. It's the iconic fragrances that moved that family forward. If you look in the book you’ll see that those Iconic status. if they’re French I probably wrote about them in my Perfume Legends.
﻿﻿
E: When a fragrance is discontinued you tend to keep it on your guide for 2-3 years more then you remove it unless it is very remarkable. With the heavy rotation we’ve seen in the last 15 years of new launches and discontinuations, it seems like the fragrance world has pushed more quantity rather than quality. Could you name some of the discontinued fragrances in there years you decided to keep and explain why?
M: When a fragrance is discontinued I keep it in for 2-3 years if it is a mass market fragrance. If it is a prestige, I could keep it in for a lot longer because the fact is the prestige fragrances tend to hang around in outlets for long long time. I mark them with a D. The other reason for keeping with it is that so often people go into store and say “I used to use it, but I can’t find it” and it’s not listed. Then the sellers don’t know what else to suggest them so they will lose the sale. For example for years I listed Deneuve, Catherine Deneuve fragrance, 1986. It was a long discontinued and the reason I can’t prepare it is when we tried to take it out we got requests from retailers in the states saying “Put it back! Put it back!”. Likewise I just put back a Maxfactor one because three requests came from England asking “Please, put it back!” so we put that back. We try to be sensitive with discontinued fragrances because we do understand they are important for that.
﻿
E: Which is your advice to a brand willing to create a new fragrance to be launched in such scenario?
M: Oh God, I can’t answer that! Haha!
Look, I tell you a couple of truths. People read things that interest them, sometimes that happen to be an advertisement. Now turn your head around, people buy things that interest them and sometimes, that happens to be a fragrance and the first thing that you got to do is to interest people. But I think you have to ask yourself: "What's interesting? Why  should somebody buy that? What tickles their immagination, tickles their interest in a world with 4000 new fragrances? What makes you stand out?".
If you don’t find that, chances are you get to throw your money into the wind. It’s not so difficult actually.
The first thing is to be adventurous. Most people because of the money, firstly the brands of course, they are risk-advese and so they use marketing to try to minimize the risk one of the things that cost them and to minimize risk in their mind they create perfumes with a very broad appeal because the idea is if it's liked by many people then there are chances that the sales are going to be better.
Problem: if it has got a broad appleal the chances are it’s not got a signature. It will be pretty, nice and forgettable. It won’t work. It’s really tough to come up with a fragrance that is pretty, broad appealing but with a signature. It’s tough. One of the few will be Happy by Clinique: a perfect fusion of flowers in a fragrance, everybody likes that but that’s tough. My first advice will be polarize, go for something acventurous. Every great fragrance, almost all the fragrances I’ve listed as the icons in the timeline, they tried a new path, they tried a new direction. And that’s the first step, you have got to have something new, you have got to have something more adventurous. Customers are more actually adventurous than most of the brands are, the brands try to play it safe. But almost frequent is the iconic ones succeeded because customers were willing to look at something interesting, look at something different. I would prefer to polarize the market. Give me a fragrance that 5% of the people are totally addicted to and 70% of them love and I’ll give a hundred million dollar brand.

Michael's subtle sagacity is really contageous and we both start laughing!
Second is, find a perfumer that you trust, you can work with, those work you admire, take a look at his description in the database. Go in and look at his work, go smell, go smell until you find something that you understand! Do your homework, most people don’t do their homework! They don’t know nothing about that, they don’t use the database to get the data they want. You know, If I wanted to employ a new perfumer and I was new I take a package of ten logins of the database, it would cost you like a hundred euros, and I spend day after day just looking through the key perfumers, pull out all the fragrances, sort them chronologically. Then print it out and go smell them and see what talks to you because in the end you’re the one that has to work it too, it’s emotional and when you find a perfumer whose work you love, go and talk to him or talk to her. So that’s probably the best thing you can do.
The last thing you can do is get somebody to write a great story. So much stuff we get in is guff!Haha!
So get somebody with a great story, not a thousand words. if you come up with it and you can’t fit it into a very short space then there’s something wrong. It has to grab interest, it has to grab hearts and minds. Does it makes sense to you?

It totally makes sense indeed and stigmatizes most of what the art of perfumery shouldn't be about: a pletora of brand-new safe, pretty, forgettable juices every year.