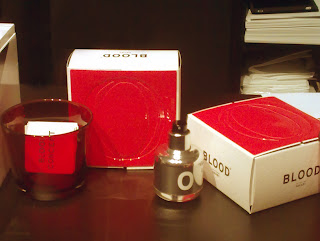 Blood, bivalent emblem of human life. Red corpuscles and white corpuscles, vital stream and pool of violence, ancestral memory and model of our becoming. At Esxence 2011 the new line Blood Concept without doubts got the attention as one of the boldest ideas of this edition for both aesthetical and conceptual reasons and like all the strong proposals it cannot leave you cold. But let's get to the roots of where this inspiration comes from. 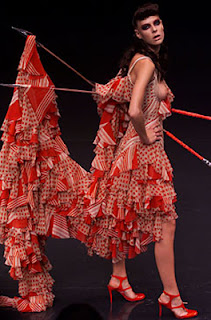 By now since decades art has undestood how evocatory is blood's call and how dense is its meaning. In 1991 the british artist Marc Quinn already understood it when he did the disruptive work "Self", self-portrait sculpture of his head totally made of his own frozen blood, strong expression of himself, physical metaphor of fragility (the sculpture is preserved at constant temperature below zero degrees).

Also fashion ten years later takes inspiration from the ematic flow and from the clinic charm of this aesthetics hovering between Eros and Thanatos. A prophet of this movement is for sure Alexander McQueen that with his first collection "The dance of the twisted bull" hold in an ex-abattoir puts on the catwalk a model transfixed by the banderillas like a bull and her dress gets bloody red along the hems.


Even in music artists have sponged on the brutal magnetism of blood like the chameleonic Bjork launching in 2001 the first single from the album Vespertine "Hidden place" which video is centered on the obscure fluid of life. Again in 2008 Alanis Morriset chooses to launch her seventh album Flavors of Entanglement with the video "Underneath"featuring her living in a pulsing heart that pumps around blood and life.
So also in perfumery blood's call seems irresistible and the living proof are creations from some forward houses like Etat Libre d'Orange with Vierges et Toreros and moreover with Secretions Magnifiques inspired by all body fluids.
Sons of this movement Antonio Zuddas and Giovanni Castelli present at Esxence Blood Concept: "It's a new concept, doomed to flare into the nostrils of the most discerning people. It comes from the need to translate everyone's instinct for the choice of a perfume that suits him. It's the way to traslate an everyday's gesture into an act of identity claim" they say.
And if the theme is not new anymore, the evolutional-instinctual approach seems cool as it loads blood of memories of hour history where each group marks a precise identity and also a milestone of the evolution of the uman being resulting in an olfactive "genderless and flowerless symposium". 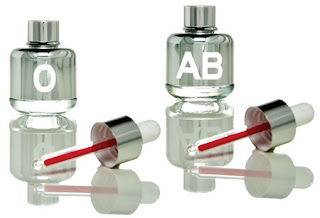 Group 0 represents the primitive predator identity and joins the aromatic and fruity topnotes of thyme and raspeberry to a suede, woods and metallic notes full body. On the skin gets thicker with good sillage and staying power and showing a surprising effect given by the winning raspberry melting into a smooth dry suede contrasted by the tanning notes of birch coupled with a metallic base recalling the smell of meat in such an ipnotic way that I couldn't resist to try it.
Group A represents the vegetal identity of social man living in the first communities. Olfactory speaking it translates into the impression of a kitchen-garden dominated by tomato leaves and basil with fresh spikes given by star anise. On paper I could barely detect a slightly mossy-metallic base but withing a more airy and classic, less impressive context.
Group B embodies the nomadic identity of the man-explorer travelling and mixing together with different cultures. The fragrance is a woody juice with spicy artemisia, black pepper and slightly toasted touches of black tea balanced by a fresh-fruity accord with apple, red fruits and pomegranate. The solid and dry base is given by patchouli, teck and the metallic accord that also here on paper seems to hide under the woods.
Last Group AB that together with the 0 I found to be the more centered on the concept, represents the mineral and hurban identity of the contemporary man. It translates into a very modern juice that refuses every natural reference to the point it remembers the style some Comme des Garçons are composed and in particular Odeur 71. The strong aldehydic mineral start opens later to slightly acquatic sensations with warm stones vibes to reveal in the end a dry base with cedarwood and shiny metallic notes.
I found well done also the clinic packaging playing with red-white colors with even a dropper alluding to medicines. After all also a perfume can be a medicine, an daily boost for the spirit.
Invia tramite emailPostalo sul blogCondividi su TwitterCondividi su FacebookCondividi su Pinterest

I love this fragrance. group 0.