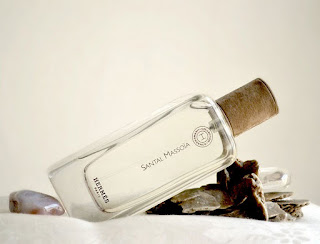 I must confess I not always go into raptures over Jean Claude Ellena's minimal-chic transparent style except when compositions don't turn hollow after the Ellenization process but where subtraction preserves the crystalline surface of the creation to let unusual carrying woofs shine through it. Nevertheless not everything turns out as it should and the latest Hermessence Santal Massoïa only partly does the trick.
For sure the name got my attention about a couple of things. First of all I was eager to smell Monsieur Ellena interpretation of sandalwood (his first one if I'm not wrong) while the second one was about the exotic part of the name of this fragrance.

The good thing about this passion is it allows you to learn concepts involving many areas and making a brief research I found out the Massoïa tree is a tree from the lauracee family that grows originally in New Guinea and Indonesia. Since many centuries its bark is used to extract through steam distillation an aromatic oil rich in lactones (also precisely called massoia lactones) some of which can be found also in flowers like tuberose. The released aroma is milky and woody with elegant tonka bean, sandalwoody and nutty facets. Moreover it features a fruity coconut aspect without suggesting suntan oil or batida de coco that tends to seem cheap.
Right from a green impression the fragrance starts immediately conjuring up an exotic foliage with acidulous tinges given by blackcurrant buds absolute that's one of Ellena's fetish raw materials as he says in his recent book Journal d'un parfumeur. Despite the addition of the aromatic mood of fig leaf with its milky sap making the accord playful, also because of a translucent cedarwood base it refers too easily to the masterpiece of another master of transparent architectures, Dyptique Philosykos by Olivia Giacobetti with its disarming clearness. 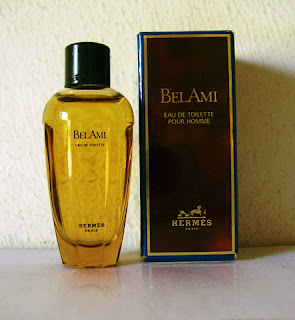 Fortunately here the result is sappier and once it fades out the pungent greeness of the blackfurrant lasts longer joined by a very slight violet floral aftertaste. Ellena tries this way to emphasize the sandalwood roundness that, being overminimal is rationed to a really infinitesimal dose respect to Hermès chic allure. By the way right one of Hermès family jewels, the masculine Bel Ami (forget about the nowadays bloodless version) composed in 1986 by Jean-Louis Sieuzac (Yves Saint Laurent Opium, Dior Fahrenheit e Dune) featured, hidden in the folds of most precious leather a fetching, enveloping Mysore to which few people could resist.
The only little surprise, the only genie jumped out rubbing the bottle is a pleasant grilled peanut facet with its slightly oily touch floating on the powdery base of this woody-lactonic juice. That's the risk of composing an haiku: you have to choose very carfully your words otherwise many will sound hackneyed and the silence between them becomes too loud to let you appreciate the rest.
Invia tramite emailPostalo sul blogCondividi su TwitterCondividi su FacebookCondividi su Pinterest

I love JCH, but some of the latest launches were a bit disappointing to me...
This one sounds interesting but I would have to see about coconut and peanuts together...sounds like Brazilian sweet tooth treats...

I'd be more curious to taste these brazilian treats now... In Massoia the coconut is not too prominent anyway. Looking forward to hear your comments once you will try it dear!