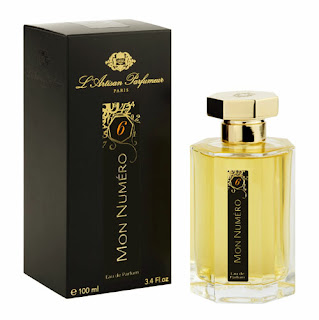 Pitti Fragranze last edition made me one of the biggest gifts I could imagine: the chance to meet Bertrand Duchaufour, a great perfumer, one of my favourites that put his olfactory signature on both commercial and niche fragrances like Jo Malone Lime&Basil and Acqua di Parma Colonia Assoluta (with Jean Claude Ellena) or Comme de Garçons Avignon till Artisan Parfumeur fragrances (Dzongkha, Fleur de Liane, etc...) and Penhaligon's which enstablished a fruitful collaboration with him.
Right thanks to Artisan Parfumeur Monsieur Duchaufour held the launch conferencefor the new line Mon Numero, a serie of exclusive fragrances with even higher quality raw materials. The exclusivity is given also by the fact that these ten fragrances named simply with numbers will be sold each one exclusively for every country of the ten biggest retailers for Artisan Parfumeur. I was so curious that I couldn't wait to smell them when I heard they would have been introduced by Bertrand himself. 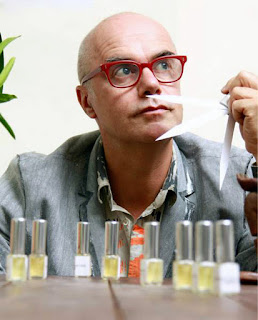 The Mon Numero project started some years ago before Duchaufour was appointed as artistic director and it was originally a collection composed of 15 fragrances named like numbers (skipping the 5 for obvious reasons). The concept was then developed in 2009 and some fragrances were sold as exclusives like No. 2 bought by a wealthy russian admirer for her collection.
The eaux de parfum have been made in random order as randomly they have been attributed to the distributors of the various countries that chose blind a number each one. The inspiration behind them comes too as an outcome of the carte blanche given to the Parfumeur Maison: some have a completely abstract stamp like No. 10 (leathery oriental) for the United States, come others take inspiration from the classics like No. 8 (powdery floral) exclusive for France and freely based on Guerlain's Après l'Ondée. Again, others take inspiration from travels like No. 6 exclusive for Italy.

"Inspired by our travels: evoking sensations of rebirth in which the first drops of rain give life back to the earth. Planet Earth – with all its sublime and powerful richness. An unusual, lucid harmony between green, fruity, watery, floral and woody notes. Mon Numéro 6 has a dreamy, leafy mood, imagine yourself barefoot on the ground in the midst of a monsoon"


The scent impressed me for the mastery that a great traveller like Duchaufour shows in handling contrasts used here to conjure up forces of nature. This case fits well with the concept of rithm because this juice takes you on a seesaw with warm and cold, sweet and salty, moist and dry, dirty and clean notes.
Headnotes bloom on skin showing a cold rush of pink pepper up your nose opening up the nostrils immediately balanced by warm, dry  wind loaded with electricity. The contrasting effect given by heady indole with a pinch of saffron creates a sense of strain like the drops of calcareous water sizzling on a red-hot iron. Beyond this, imaginary green expanses appear from far where the echo of white flowers gives off their human call, sweet and earthy at the same time. Translucent like dried petals, tuberose and jasmin play here the main role turning into sap rather then opulent flowers, maybe a reference to the lunar dew flowing languid in Nuit de Tubereuse mixed with the salty clearness of Magnolia Romana. The real mood of the fragrance is dry, almost seen in thousand reflections through salt crystals. By contrast even the trees of this exotic sunburst jungle give juicy fruits like mango, passion fruit, pineapple and melon so tasty to make my mouth watering.
Again basenotes steer the accord to dry woods and dust so fine grained to recall the chalky effect of Penhaligon's Sartorial, here used to give a comforting powdery bed. A tiny bit of vetiver finishes the dry accord preserving the lightness of the composition.
The result is a fragrance with average sillage and good staying power made for a dynamic woman from the restrained femininity (that can be shared with her partner for casualwear) joining different olfactory families, ozonic, indolic floral, fruity and woody in a different truly light and suggestive style.
Invia tramite emailPostalo sul blogCondividi su TwitterCondividi su FacebookCondividi su Pinterest