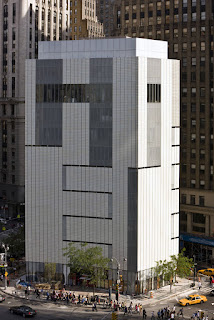 Finally here we are, on November 20th officially opens its doors the Department of Olfactory Art (DOA) at Museum of Arts and Design (MAD) in New York. The event doesn't touch directly Italy but is an important worldwide award to perfumery. Even if the most beautiful Lalique and Baccarat flacons are since ever appreciated as exquisite works of art, it's by no means the first time a perfume bottle enters a museum for the beauty if its content. Nevertheless this time it is not just to play matching perfumes to famous paintings but to raise perfumery as an art itself. The merit goes to Chandler Burr, a great catalyzer who during these years exploited his great communication skills to divulgate the aestetic vision of perfume creators and critcs through pubblications like The Emperor of Scent or his reviews on the New York Times. Art becomes a common heritage and constitutes a common aestetic value only when it permeates everybody's culture. The DOA enstablishment in a metropolis like New York marks a great step in this direction towards which experts, bloggers and enthusiasts all over the world go since years writing about the eighth art online and on printed paper.

Since the beginning, the Department of Olfactory Art achieved great success inside and outside the perfumery industry and got donations from giants like L'Oreal, Estee Lauder, P&G Prestige, Chanel, Hermès, Givaudan and IFF which already contributed to Chandler's scented dinners at Pitti Fragranze. Special contributions were given by Funders Arcade Marketing USA and Guerlain, Diptyque, Women in Flavor and Fragrance Commerce (WFFC) and IFF which will also provide raw materials and high-tech diffusors for the opening exibition at DOA, The Art of Scent 1889-2012 (from November 20th to February 24th 2013) celebrating perfumery history through twelve masterpieces like Jicky (Aimé Guerlain 1889), No. 5 (Ernest Beaux 1921) till Osmanthe Yunnan (Jean Claude Ellena 2006) and Untitled (Daniela Andrier 2010). While since ever I say the Osmotheque in Versailles is the place to be for smelling storical fragrances like Jicky to understand how different was the original compared to the current edition on the shelves, if you have the chance don't miss the MAD because also smelling the current version you will understand how technical development of raw materials through these iconic and visionary creations has driven a stylistic evolution that will be marked by installations made by Diller designers Scofidio e Renfro.
The DOA also wants to follow completely the lively spirit that inspires MAD since its birth. In fact the museum basic building is like an empty box suited for any content. It doesn't have a permanent collection but it guests temporary exibitions. This under-construction philosophy is well suited for the most ephemeral and volatile of arts you spray and in a while it has already changed from top to heart to basenotes. Here we go then with the first exibition joined by a serie of lectures, most of which are already sold-out, to better understand how great perfumers conceive the creation of a fragrance. If you're lucky enough to spend some time in New York during the Christmas season, there's still some chairs left here
Dec 13 The Birth of a Scent: Spicebomb - Carlos Benaim (Ralph Lauren Polo Blue, Elizabeth Arden Red Door) will show the birth of his art work Spicebomb (Victor&Rolf). Audience will receive mods and some raw material on the blotters.


As a breaking news and in perfect style with performing arts, an exceptional Artist in residence like Ralf Schwieger (Hermès Eau des Merveilles, Frédéric Malle Lipstick Rose and many others) will be working each week at the sixth flool at MAD interacting with the audience to create two fragrances focused on spearming and ginger, two teasing proposals from Chandler Burr.