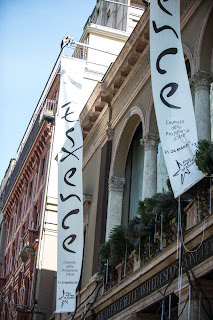 The star, the one symbolizing the five years of excellence at Esxence, is going down to make space to the everyday's dawn. Slowly all the new launches will head the shelves of the perfume shops where everybody will be able to smell them again with more time and maybe to change the first impressions made surrounded by the euphoric and fast atmosphere of the booths.
Speaking about stars, also this year there are interesting newborn ones in the sky of artistic perfumery. Big trend is confirmed the galaxy of green notes that go from the herbaceous and aromatic notes to the vegetal or cold spicy ones of cardamome and coriander, not to forget the floral ones like magnolia and gardenia. But here we go with the Walk of Fame where shine bright the stars that caught my attention.

First of all I had the pleasure to finally meet Jul et Mad about which I told you before. Smelling again together with Julien and Madalina their beautiful creations Stilettos on Lex, Terrasse à St-Germain and Amour de Palazzo, I also had the chance to see in real life the very refined packaging, a simple yet elegant grey leather jewel box.
﻿﻿﻿


The first new discovery instead is Enchanted Forest from the californian brand The Vagabond Prince created by Zoran and Elena Knezevic of Fragrantica. After talking for longtime with Zoran and Elena about the inspiration behind this perfume made in collaboration with Bertrand Duchaufour, I smelled the fragrance on a paper blotter and on skin later and it bewitched me. Bewitching is the right word for the blood running through the veins of a witch living into the woods, with pulpy blackcurrant lips breathing sweet basil and honeysuckle, but soon I'll give you more detail about the mystery of the enchanted forest.
﻿


Another beautiful discovery has been Mon Nom est Rouge created by the young and talented Cécile Zarokian for Majda Bekkali and her Sculptures Olfactives. The fragrance takes inspiration from the opulent and passionate atmospheres of Orhan Pamuk's same named novel that Cécile olfactory transposed in a spicy aromatic harmony popping out almost metallic rose and geranium which beams radiate through a cloud of elemi from Philippine, cardamome, ginger and cinnamon. A stimulating perfume that's almost ipnotic and goes straight into my wishlist. 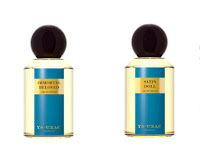 Interesting also the new creations by Vincent Micotti, YS UZAC founder that are highlighted by the new packaging designed by his wife Vera Yeoh. More mature and personal than the first four launches of the brand, the new creations express strength and grace. The invincible strength of love is the theme behind Immortal Beloved that's intoxicating with its beautiful cognac rush on top that makes you lose in a voluptuous violet abyss with leather, spices (pepper and immortelle) and amber. The grace of iris instead is the dress of Satin Doll, an elegant doll with the skin like a porcelain tuberose. It's fragile but not dumb or frivolous and it shows since the beginning the temper of elemi, pepper, patchouli and resins rendering a very particular neochypre base.