"A beautiful perfume is the one which gives us a shock: a sensory one followed by a psychological one" Edmond Roudnitska 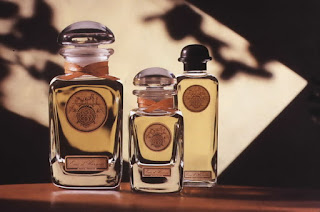 As I pointed out in the first part of this monography, Edmond Roudnitska in 70 years left us 17 jewels that allowed him to mark the contemporary olfactory aesthetics. What I cherish as the most precious gem, the absolute masterpiece summarizing all his art is Eau d'Hermès. 1951 for the Hermès house is a revolutionary year: the death of Emile-Maurice Hermès puts an end to the Hermès Frères era during which the brand from saddlery becomes producer of luxury leather goods and accessories even for the Tzar. For the first time in more than a hundred years the company passed out of the blood line under the direction of Emile's son in law Robert Dumas. He immediately wanted to highlight the link with heritage baptizing the passage of the baton with a perfume dedicated to Emile aimed to be the essence of the Hermès elegance. Edmond Roudnitska who found in Robert both a customer and a friend, aknowledged this spirit concocting a perfume exuding class and tradition,  renewed though through his abstract vision of olfactory creation.

﻿
The bouquet in Eau d'Hermès transposes various classic french perfumery themes in a very refined game of references that's not just for the sake of sciolism, themes that Roudnitska revises to obtain that olfactory shock he claims a beautiful perfume must produce.
There's a reflection of Jicky running through the contrast of lavender on top and cumarine in the base giving the honeyed-tobacco hint together with a tiny bit of civet. Again cumarine, the floral heart and a chypre whiff play the echo of one of the most glorious russian leathers ever created, probably the most amazing creation by André Fraysse higly esteemed by Edmond, Scandal, where the bodily aspect of costus is replaced here by cumin. That's why there couldn't be Eau d'Hermès without birch tar or orris root.
On top of this olfactory marvel hovering between fougère and leathery chypre, Edmond makes orange, the brand sun shine enhancing the citrus cologne theme while referring to the colour that will become during those years the symbol of the most chic french saddlery, together with the orange peel-like packaging and the emblem featuring the gig. Eerything here is evocation more than representation as would say Jean Claude Ellena who keeps Eau d'Hermès as an absolute masterpiece. Everything is abstract sublimation, even the smell of the interior of the famous sac à dépêches created in 1935 and later renamed the Kelly as a tribute to Grace Kelly, that here melts on the skin till it becomes just an aura, the smell of skin itself, clean, slightly salty and human, yet bearing a very refined, intellectual sensuality. 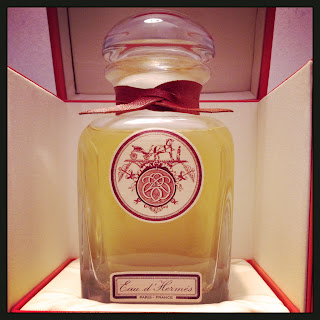 Also the blazon that originally marked each bottle has a kind of magic in it, a magic that partially disappeared now that the symbol has changed. The monogram EH, Emile Hermès, but also Eau d'Hermès is mirrored as two simmetric sides of a bridge linking past and future and framed by a circle. There's also the caduceus, the staff carried by the God Hermes which origins date long before the greeks back to Babylon and to the egyptian Djed, a symbol of balance and maybe an obscure reference to another beautiful perfume with leathery tobacco facets. It is here also mirrored forming a St. Andrew's cross, originally a solar symbol. Finally the gig symbol of the Maison Hermès but also associated with the God Helios, another sun reference that brought to this perfume good luck for more than 60 years.
Eau d'Hermès was created at first for the customers of 24, Rue du Faubourg Saint-Honoré only and later on for everybody sending an order to the boutique in Paris. It was presented in a crystal flacon inspired by the old gig lanterns produced by the glassmaker Saint Louis decorated by a leather ribbon. Only in the eighties were introduced the first small splash bottles for the shops. The last produced crystal series are limited editions dating from 1993 to 2001 and are decorated by different engravings each year: 500 pieces (120ml) per year. The 470ml flacon you can see in the picture is more than 30 years older and since destiny helped it finding my house, I want do share small samples of it with three friends I will draw out among who will leave a comment here below within a week.