Who has tasted paradise once knows how to detect its perfume. DelRae Roth knows it well, as she lives close to one of the most amazing places in the West Coast, Presidio, California, where she often walks through the woods and inhales the nature smells inspiring her creations. DelRae is a lovely lady who spent many years working as a graphic designer in San Francisco and in 2000 decided to pursue a dream keeping in mind this only rule: "Do what you love, and money will come". Joining spirit of enterprise and love for french chic and perfumes she decided to write to Michel Roudnitska. After two years and more than 300 trials, Bois de Paradis was launched in 2002 and later the rest of Parfums DelRae.  Among them all, this fruity-wood diffusing on skin like thousand reflections of an exotic bird's iridescent feathers won my heart at first sniff. 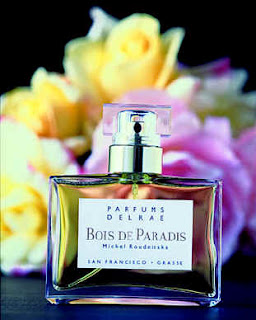 Defining in simply fig or fruity, floral or green, woody or spicy would be restrictive because the whole is more than the sum of its parts. Bois de Paradis starts with the airy notes of bergamot and instantly you get dewy leaves and bushes full of juicy blackberry. The fruity tones give way to a beautiful damask rose recalling the rose heart in Shiloh (Hors la Monde), here covered in dew like in L'ombre dans l'eau. Less pungent than blackcurrant, blackberry stains the rose with purple making it heady like a glass of marzemino.

The lush vegetation all of a sudden gets deeper and the roses warm up thanks to the dry and slightly medicinal touch of cinnamon and pepper, the perfect balance to the moist foliage.
The floral aspect slowly fades leaving a blissful halo echoing the red berries. The heart is a seesaw of sensations and gets back to the green, this time the aromatic and rough one of a fig tree with milky sap and ripe fruits. Finally amber melts on the cool cedarwood giving it the yummy hint of a hot fruit curd, gently , acidulous, never cloying.

Bois de paradis  irradiates the golden light of an innocent, primitive desire and hence even more sensual. It's not difficult to guess Michel imagined it as the perfume of a beloved ideal woman as he told me the last year when I told him to me it's one of his most beautiful creations. Discrete yet longlasting, after some time I didn't wear it, it still smells flawless: its beauty and its depth are moving, no matter it's Adam or Eve wearing it.
Invia tramite emailPostalo sul blogCondividi su TwitterCondividi su FacebookCondividi su Pinterest