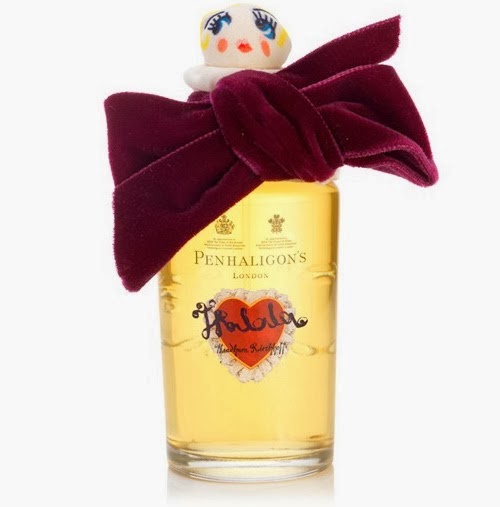 The name of Edward Meadham e Benjamin Kirchhoff will sound familiar to the fashion junkies among you. Maybe because it's a brand enstablished only in 2007 or because it's mainly sold in the UK, I never heard about them before (this also means now I don't follow fashion as I used to) so I thought I needed an update. A glance to some outfits from their catwalks though sufficed to me to enter their kitsch and unconventional world mixing inspirations from present and past with a well defined touch because as they say, “We do not have a signature but rather a handwriting. We like to tell stories in different ways”. One of the different ways they like to use telling stories is through perfumes as they shown scenting some catwalks with Hammam Bouquet, Cornoubia and other Penhaligon's classics, so they chose to write their own olfactory novel together with Bertrand Duchaufour.

﻿
Spraying the fragrance, you get struck by a dry boozy sensation sparkled with aldehydes opening your nostrils to the whispered verdancy of galbanum and the medicinal saffron gold. Slowly starts flowing in my mind a tale, the one of the sorcerer's apprentice: it's like if a perfumer's apprentice left alone in Duchaufour's lab started playing with the master's accords, shaking blotters and mixing vials on the notes of Paul Dukas.
The apprentice dares following no appearent rule and grabs for the ambrette seed butter infused tuberose in Fusion Sacré Clair now, then goes for the yummy heliotrope in Traversée du Bosphore. Not yet satisfied he pours two drops of mystery with the subtle embalming incense piqued with immortelle and myrrh in Jubilation XXV and a pinch of iris from Cuir Nacre. The apprentice has fun mixing everything unaware of any possible danger while smelly molecules rise from the potion like colorful fire balloons.

Differently from the end of the poem, when the Master gets back he's surprised, dips a blotter, opens his nostrils and inhales closing his eyes. Silent he adds the magic touch to what could have been a mishmash: the natural vibe of violet leaves absolute and the honeyed leather facets of opoponax turn this floral-spicy amber into a shimmering balance with unusual body and complexity for the latest Penhaligon's launches.
The floral heart is silky, diffusive yet soft and embraces the basenotes with the mellowness of ylang ylang. Just a tad more clove wouldn't have done any harm and maybe has been toned down avoiding too explicit L'Heure Bleue era references or maybe to stick to IFRA regulations. Also the woods are very silent and deepen the resinous base with the silvery muskiness of cashmeran.
Even if it commits the sin of newness, what lasts on skin for more tha eight hours is a beautiful oriental sap where the classic ambery combo labdanum-vanilla is replaced by the more unusual incence-heliotropine (an ongoing trend), less animal and more contemporary. The potion is finished by a cloud of slightly retro powdery musks, lacking openly erotic dirty facets yet as changing as a philter to seduce with sly looks.

Also the packaging reflects this playful mood dressing the classic Penhaligon's flacon like a naughty rag doll, all about big eyes and heart lips with a big red velvet bow on the neck that seems to cock a snook singing Tralala!

Tralala will launch exclusively at Harvey Nichols on the 21st of April and in the UK at Penhaligon’s boutiques but leave a comment here and take the chance to get a preview sample. I will draw five lucky friends within a week.
Update: Tralala will be available in Italy starting from May.

I hope I'll be one of the lucky few! I'm very curious about Tralala!

This one look's like it's first rate Duchaufour perfume.Have not really liked anything recently by Penhaligon's, but this seems to have something special about it.

Ooh, nice review, and this Pehaligon release actually seems to tick all the right boxes for me. Thank you for the chance of winning a sample.